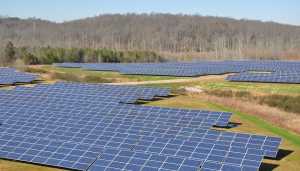 The United States of America is one of the few countries in the world alongside the likes of Germany, China, and India that is upping the ante in its solar industry. While the current Trump administration might seem hostile to the concept of man-made climate change several companies in America believe that solar energy is perhaps the most sustainable form of energy- one that will likely make for a better tomorrow, not only for the US, but for the entire world.

The USA has one of the highest carbon footprints among major nations in the world. And, that makes it all the more necessary for them to adopt energy sources that can help them in cutting back some of their carbon emissions- a move that should be carried out even after President Trump pulled out of the Paris Agreement, simply for the gravity of the situation that the current President often seems to miss.

Having said that, it is not as if America is not making a serious push into the solar sector, rather the opposite of that is true. Stats tell us that in the last four decades, the cost of solar energy in the US has decreased by about 150 times. At the forefront of this change are a number of companies that are shaping America’s solar sector. We take a look at the top 10 solar energy companies in the USA:

When you’re a subsidiary of one of the most revolutionary companies in the modern world (Tesla), you have some big shoes to fill. SolarCity, since its inception in 2006 has seen massive growth across the board and have firmly established themselves as one of the biggest solar companies in the US. The USP of the firm is that it has invested heavily in R&D of solar technology. Apart from that, it also deals in household solar installations.

The firm is based in California and started operations in 2007. In the last 10 years, the company has expanded it market from the Americas to certain parts of Europe. Sungevity primarily deals in the designing of home solar systems, wherein, it provides solutions from installation to financing. The firm was acquired the Northern Pacific Group in 2017.

Solar Five might not have a global presence, however, it is one of the biggest solar firms in the US that provide residential solar energy systems. Its teams in Massachusetts and Florida majorly focus on the local community and work in close conjunction with them to help them in installing household solar systems.

SunPower Corporation is engaged in the design and manufacturing of solar panels and crystalline silicon photovoltaic cells- a technology developed by the researchers at Stanford University. What gives the firm access to resources and manpower is the fact that it is owned by the world’s fourth largest energy company, Total.

It seems that the biggest opportunities in America’s solar scene lie in the residential sector as like a lot of companies on this list, RGS Energy too deals primarily in the residential solar space. Interestingly, RGS Energy is one of the oldest solar companies in the USA as it started selling solar panels back in 1978. The firm serves customers across the 50 states of America along with all 10 Canadian provinces.

Horizon Solar is operating in the residential solar space in the USA- a seemingly big market. It has consistently been ranked highly among the top solar companies in the US. Since its inception about a decade ago, the firm has established a major stronghold in the American solar market while providing installation and financing facilities.

Headquartered in California’s San Francisco area, Sunrun began operations in 2007. Currently, the company has operations in 23 states of the US along with Puerto Rico, making it among the leading solar energy companies in the States.

Unlike other firms on this list, Soligent is primarily a distributor of solar related products. They have a nation-wide supply chain with customers from nearly all American states. Apart from distribution, they also offer a robust after-sales support system by providing engineering and maintenance services.

Another firm headquartered in California, OneRoof started operations in 2011 before going public in 2012. As of now, the firm provides financing options to people looking to install solar systems in their homes.

While PetersenDean began as a simple roofing contractor, in a short period of time, it expanded its operations to solar installations in the residential, commercial and industrial space. Apart from installation of solar systems, PetersenDean also provides attractive financing options to its customers.

So, there you have it. The United States of America is still majorly dependent on its coal industry to meet a majority of energy requirements. However, we can hope that as time goes on and as people and more importantly the administration come to terms with the many boons of solar energy.

*This list of the top 10 solar companies in the US is a result of the editorial decision of ELE Times.

If you want to know about the top solar companies in India, click here.

If you want to know about the biggest upcoming solar parks in the world, click here.

Is India in the hands of Solar Power?