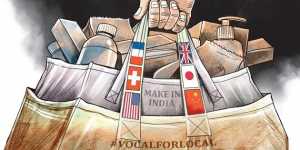 The global pandemic shows us the benefits of ‘Be Indian and Buy Indian’. We have now become critically aware of our own supply chain. We know that relying on other countries for critical items will ultimately put you at their mercy. To avoid such adversity for ourselves, it is more important than ever that we become self-reliant and reduce our dependence on other countries. The pandemic has taught the importance of local manufacturing, local market and local supply chain. Emphasis of ‘vocal for local’ asserts that it is all about ‘made in India’ and is to increase to push Indian products to become large enough to become international brands.

India plans to convert COVID crisis into an opportunity and strengthen its fight by becoming self-reliant. Self-reliant India will be realized by – Economy, Infrastructure, System, Demography and Demand. It is time to become vocal for local products and make them global. Under this campaign, a special economic package worth 20 Lakh cr. (US$ 283.73 billion) has been released by the government, which will benefit cottage industry, Micro, Small and Medium Enterprises (MSMEs), labourers, middle class, and industries. To strengthen the self-reliant India campaign Land, Labour, Liquidity and Laws have all been emphasized in this package.

The package focused on facilitating employees and employers, businesses, especially MSMEs, to get back to production and workers back to gainful employment. It plans to strengthen NBFCs, HFCs, Micro Finance Sector and Power Sector were also unfolded. This is expected to benefit 45 lakhs enterprises. This will surely provide an edge to the enterprises to stand out again in the market, resume their business activities and sustain jobs in the market.

The definition of MSME was revised by raising the investment limit and an additional criterion of turnover was introduced. Service sector will also be brought under MSME. In addition to this, the differentiation between the manufacturing and service sector is now removed. The necessary changes in the law will be introduced accordingly.

Showing his Government commitment Mr. Prime Minister approved the release of MSME receivables from government and CPSEs in 45 days. A few government decisions are worth mentioning: No global tender will be allowed in Government procurement tenders up to Rs 200 crore. Emergency working capital of Rs 3 lakh crore for MSMEs has been created to the tune of additional working capital finance of 20 per cent of the outstanding credit will be provided in the form of term loan at a concessional rate of interest without collateral, as the amount will be 100 per cent guaranteed by the government.

A provision of Rs 20,000 crore is made for stressed MSMEs. Fund of Funds (FoF) with an amount of Rs 10,000 crore will provide equity funding support for MSMEs. DISCOMs to utilise Rs 90,000 crore to pay their dues to transmission and generation companies. Construction agencies are provided an extension of six months.

Government plans to introduce new policy under which private sector will be allowed in strategic sectors leading to privatisation of PSEs. The government has aimed for maximum bang through the package, with most of the relief either regulatory in nature or reflected in its contingent liabilities. The Government has used the cover of the COVID-19 crisis to plough through long pending, politically sensitive reforms.

Ultimately a self-reliant India will stand on five pillars viz economy, which brings in quantum jump and not incremental change; infrastructure, which should become the identity of India; technology-driven system; vibrant demography; and demand.

Obviously Self-Relient campaign and relief package puts bold reforms and momentum at the heart of Government’s plan to make India a self-sustaining economy so that any other crisis that may emerge in future could be efficiently tackled.

Audit Compliance and self-service enhanced with the guidance of geofencing