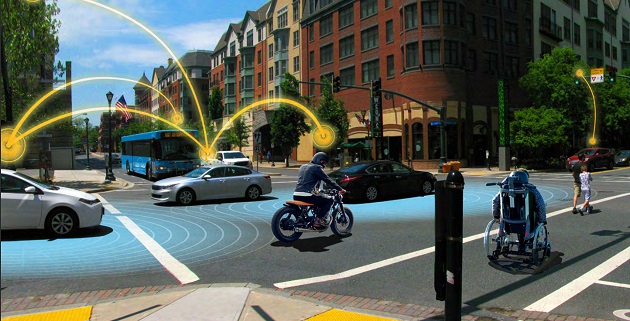 General Motors will introduce V2X technology in China later this year, the automaker said last week. The technology will be introduced on one or more Buick models and should expand to more markets in due course.

V2X encompasses vehicle-to-vehicle (V2V) and vehicle-to-infrastructure (V2I) communication systems and has the potential to alleviate traffic congestion while improving safety. It works by sending and receiving key data such as location, speed, braking status, road surface conditions, directions, and other data between vehicles and the surrounding infrastructure (e.g. road signs or traffic lights or a cloud network).

The data can then be used to inform the driver about conditions ahead. For example, a car could detect black ice and warn vehicles traveling in the direction of the hazard. A car could also alert other cars of its presence, for instance around a blind corner, or whether its anti-lock braking or stability systems were activated, thus helping other drivers avoid the potential for an accident.

GM was a pioneer in the introduction of V2X technology in production cars. Its Cadillac brand has had a system on offer in the United States since 2017, though like most rival systems it’s limited to communicating with vehicles from the same brand only. Cadillac’s system operates within the 5.9 GHz spectrum allocated by the Federal Communications Commission for V2X and can warn the driver via symbols in the instrument cluster or head-up display about slippery conditions, disabled cars, or cars hard braking. The Buick system should have a similar interface.