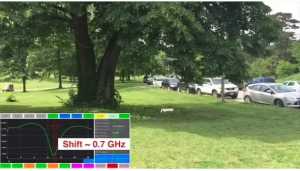 A team of researchers at Washington University in St. Louis is the first to successfully record environmental data using a wireless photonic sensor resonator with a whispering-gallery-mode (WGM) architecture.

The photonic sensors recorded data during the spring of 2017 under two scenarios: one was a real-time measurement of air temperature over 12 hours, and the other was an aerial mapping of temperature distribution with a sensor mounted on a drone in a St. Louis city park. Both measurements were accompanied by a commercial thermometer with a Bluetooth connection for comparison purposes. The data from the two compared very favorably.

In the grand world of the internet of things (IoT), there are vast numbers of spatially distributed wireless sensors predominately based on electronics. These devices often are hampered by electromagnetic interference, such as disturbed audio or visual signals caused by a low-flying airplane and a kitchen grinder causing unwanted noise on a radio.

But optical sensors are “immune to electromagnetical interference and can provide a significant advantage in harsh environments,” said Lan Yang, the Edwin H. & Florence G. Skinner Professor of Electrical & Systems Engineering in the School of Engineering & Applied Science.

“Optical sensors based on resonators show small footprints, extreme sensitivity and a number of functionalities, all of which lend capability and flexibility to wireless sensors,” Yang said. “Our work could pave the way to large-scale application of WGM sensors throughout the internet.”

Yang and her colleagues had to address stability issues, which were handled by the customized operation systems app they developed, and miniaturization of bulky laboratory measurement systems.