Choosing the right quality & reliability levels for your Space Mission 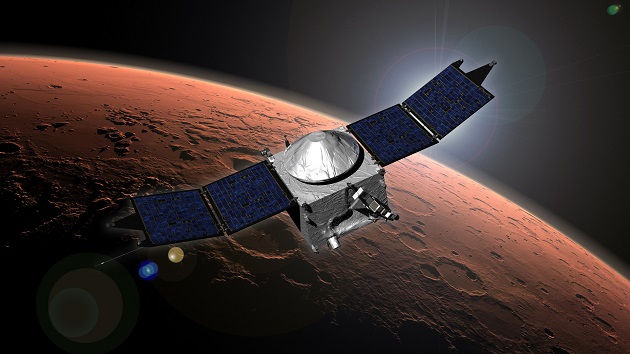 In space applications, high reliability and risk reduction are always two key considerations. While using commercial-off-the-shelf (COTS) EEE parts may be feasible depending on the mission profile needs, it is important to understand the tradeoffs. Unlike COTS parts, space-grade EEE radiation-hardened (rad hard) devices undergo rigorous tests and qualification to ensure reliable performance when exposed to space radiation, especially in long duration, higher orbit or interplanetary missions. In this article, we will look at various mission profiles, radiation and reliability requirements to understand best-fit recommendations for using COTS power devices versus silicon MOSFETs in high-reliability space applications.

Commercial electronics are used successfully in certain space applications, especially where designers can gain higher system performance and lack high-reliability options. However, COTS parts remain fundamentally different than space-qualified ones when it comes to critical aspects like product quality, safety and reliability. There are inherent risks to using COTS electronics in space, ranging from lack of confidence in parts traceability, wafer lot homogeneity, long-term performance and reliability. The most critical difference is arguably how and whether COTS parts perform under radiation conditions. Additional screening for radiation assurance may be needed to meet mission requirements, which are highly dependent the intended application, long-term operating environment, expected mission lifetime and more.

In contrast, high reliability space-grade electronics are typically rad hard by design at the semiconductor level. Parts undergo 100% parts-level qualification and screening per established industry standards defined by DLA, ESA and others. Some companies, such as IR HiRel, perform board-level qualification as well. This scrutiny gives a high degree of assurance in the quality and reliability that these electronics will perform as expected, even under the harshest conditions. Controlled manufacturing processes add another layer of confidence that the electronics will withstand the environmental and application stresses in space.

Satellite or spacecraft type, mission profiles including expected duration and orbit, as well as radiation environment are all important factors when weighing component options. Overall program cost is another key consideration. It can be a fine balance, but reliability ultimately starts with component selection. Another important thing to note is that reducing risk increases reliability. However, reducing costs entails some level of compromise, whether in quality, reliability, radiation hardness or elsewhere. Bottom line, it comes down to designing architectures that balance mission performance and cost requirements with acceptable risk levels.

Let’s take a look at mission profiles and requirements, along with risk considerations.

The smallest satellites – femto, pico, nano – usually weigh up to 10 kilograms. Limited in power, size and often budget, mission duration is typically less than 12 months. Because they can be launched ‘piggyback’ on larger launch vehicles, these satellites have limited orbit capabilities. Typical missions might include constellations for low data rate communications, IoT/M2M, spaceflight systems testing or research.

Reliability and radiation requirements are low for these smallest satellites. In Low Earth Orbit (LEO) at altitudes <650 km, the radiation environment is relatively benign. Using small satellites in constellations or clusters offers a built-in redundancy and regular equipment renewal. While systems might show desired radiation performance, it is not guaranteed, but failure is an acceptable risk.

As we will see with all satellites, part criticality and its impact on system availability drive component selection. For low-level criticality, designers could use Level 3 parts, COTS or automotive-grade silicon or GaN. With mid-level critical functions, COTS up-screening and testing is recommended. But for highly critical functions, NASA still suggests using what they classify as Level 1 or 2 parts. Note that even to meet Level 3 requirements, NASA’s classification requires additional screening per
MIL-STD-883.

Microsatellites generally weigh between 10 to 100 kilograms with a mission duration from 12 to 24 months. Missions might range from atmospheric sensing, Earth observation, early warning or scientific research. Reliability and radiation requirements are higher for microsatellites mostly based on the longer mission duration, although they still may fly in LEO.

Moving up in scale, mini satellites weigh anywhere between 100 to 500 kilograms. Typically lasting two to five years, missions may include Earth observation, weather monitoring, navigational or geospatial positioning systems, such as GPS, GLONASS, Beidou or Galileo.

With longer mission durations and higher orbits, reliability and radiation requirements become even greater. For example, over the life of a multi-year mission, total ionizing dose (TID) levels on the order of 105 can easily accumulate. This is why space-grade devices are typically rated in the 100 krad to 1,000 krad range.

For these satellites, moderate to low risk parts are recommended. Practically speaking, this means:

Members of this satellite class weigh between 500 to 1000 kilograms and have mission lifetimes of five to ten years. Typical missions include Earth observation and telecom/TV/radio communications. Based on expected mission duration and orbit, reliability and radiation requirements are even higher.

For mid-sized satellites, recommended components include:

This class generally includes anything over 1000 kilograms. Missions may last for ten or more years. Orbits are usually higher and may include communications, space observation, classified government initiatives, as well as spacecraft for interplanetary or deep space travel. Unsurprisingly, this class has the highest reliability and radiation requirements.

One exception to the higher orbit rule of thumb is the International Space Station (ISS), which orbits in LEO. ISS supports human life and has done so continuously for over 20 years. Based on these factors, it also requires the highest reliability and radiation levels for its continued mission success.

For these large satellites and spacecraft, recommended components include: 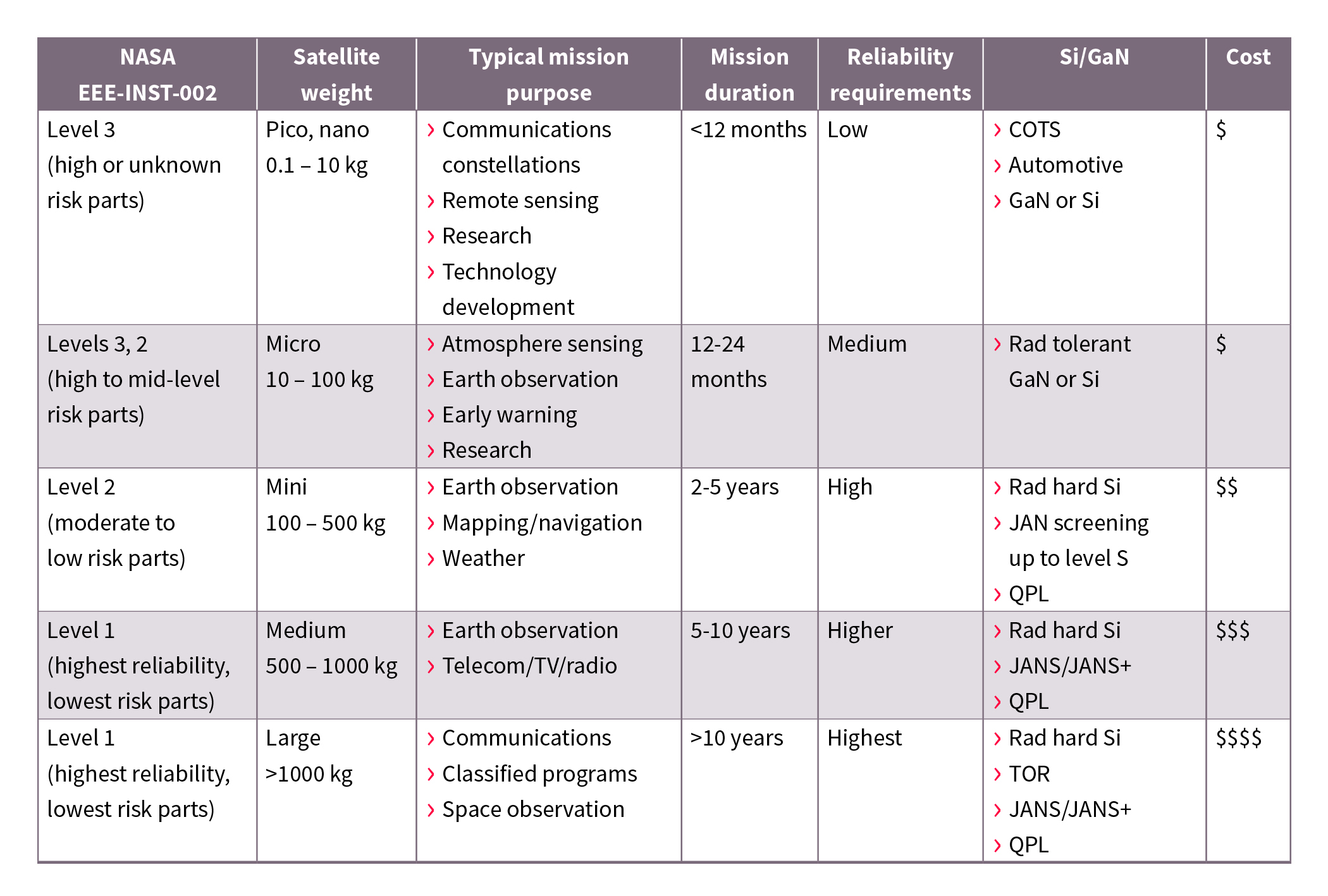 Clearly, the end application drives the qualification, radiation and reliability requirements. As we’ve seen, there can be vast differences in mission profiles, expected lifetimes, orbit and radiation exposure, all of which factor into the reliability-risk calculus.

Given the unique constraints in space – environmental hazards, limited servicing options, variability of mission lifetimes and orbits, requirements for function criticality and system availability – both COTS and space-grade components will certainly continue to play key roles. However, currently only rad hard silicon meets QPL, JANS and Aerospace TOR requirements for missions where “significant risk of failure, or the inability to quantify risk or confidence” is unacceptable. As an industry, we will no doubt continue to focus on advancing technologies, platforms, packaging and more to deliver radiation hardened solutions that bolster confidence from the component through system- and mission-level.