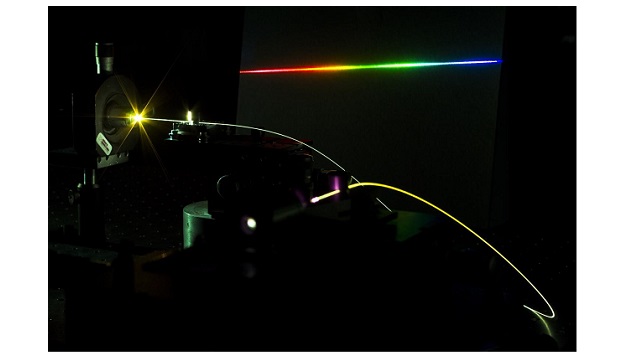 Researchers from Institut National de la Recherche Scientifique (INRS) and the University of Sussex have collaborated to create an optical device that uses AI to control the properties of light. Using an actively controlled photonic chip, the researchers prepared and manipulated patterns of femtosecond (fs) optical pulses. These pulses enabled access to an enhanced parameter space within the framework of supercontinuum generation (i.e., the generation of extended light spectra through intense light-matter interactions). The researchers used machine learning techniques to tune their approach.

The development of lasers featuring intense and ultrashort laser pulses, along with ways to spatially confine and guide light propagation, has led to an array of possibilities for optical systems, including the generation of supercontinuum.

By exploiting the ability of powerful, miniature, optical chips to shape and control laser light, the researchers developed a way to divide and recombine laser pulses so as to control the individual characteristics of the light pulses. They created and manipulated intense ultrashort pulse patterns, demonstrating diverse patterns of fs optical pulses. These pulses could be used to generate a broadband optical spectrum.

“We have taken advantage of the compactness, stability, and subnanometer resolution offered by integrated photonic structures to generate reconfigurable bunches of ultrashort optical pulses,” said Benjamin Wetzel, a principal investigator at the University of Sussex. “The exponential scaling of the parameter space obtained yields to over 1036 different configurations of achievable pulse patterns, more than the number of stars estimated in the universe.”

To meet the computing power requirements required for its approach, the team used an automatic learning algorithm to help determine the best parameter combinations for obtaining the exact type of light they desired. The researchers showed that the control and customization of the output light could be performed efficiently, when they conjointly used their system and an algorithm to explore the multitude of available light pulse patterns possible for tailoring complex physical dynamics.

This work could affect fundamental and applied research in a number of fields, because many current optical systems rely on the same physical and nonlinear effects as those underlying supercontinuum generation. The team’s novel approach could seed the development of other smart optical systems via self-optimization techniques, including the control of optical frequency for metrology applications, self-adjusting lasers, pulse processing, and amplification, as well as the implementation of more fundamental approaches to machine learning, such as photonic neural network systems.