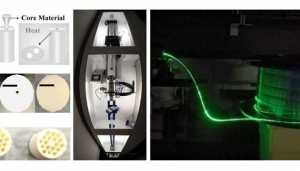 A new way to use 3D printing has been developed by the research scientists, which can be drawn into silica glass optical fibers, which forms the backbone of the global telecommunications network. This new fabrication method could not only simplify production of these fibers but also enable designs and applications that weren’t possible before.

“Making silica optical fiber involves the labor-intensive process of spinning tubes on a lathe, which requires the fiber’s core or cores to be precisely centered,” explained John Canning who led the research team from the University of Technology in Sydney. “With additive manufacturing, there’s no need for the fiber geometry to be centered. This removes one of the greatest limitations in fiber design and greatly reduces the cost of fiber manufacturing.”

“Additive manufacturing approaches such as 3D printing are well suited to change the entire approach to fiber design and purpose,” said Canning. “This could, for example, broaden the applications of fiber optic sensors, which far outperform electronic equivalents in terms of longevity, calibration and maintenance but haven’t been widely deployed due to their expensive fabrication.”

The new achievement builds off earlier work in which the researchers used a polymer material to demonstrate the first fiber drawn from a 3D printed preform. Applying this approach to silica has proved challenging due to immense material challenges including the high temperatures, more than 1900 degrees Celsius, needed to 3D print glass.

“Thanks to a novel combination of materials and nanoparticle integration, we have shown it’s possible to 3D print a silica preform,” said Canning. “We expect this advance to bring a flurry of activity, including other additive manufacturing approaches, to accelerate this field.”

In the new work, the researchers used a commercially available direct-light projection 3D printer. This type of additive manufacturing is extremely precise and typically used to create polymer objects by using a digital light projector to polymerize photo-reactive monomers. To create a silica object, the researchers added silica nanoparticles into the monomer at amounts of 50 percent or greater by weight. They designed a 3D printed cylindrical object that contained a hole for a core. They then inserted a similar mix of polymer and nanoparticles into the hole, this time adding germanosilicate to the silica nanoparticles to create a higher refractive index. In this way, the integration of a range of dopants becomes possible.

Next, the researchers used a unique heating step called debinding to remove the polymer and leave behind only the silica nanoparticles, which are held together by intermolecular forces. Finally, raising the temperature further fused the nanoparticles into a solid structure that could be inserted into a draw tower where it is heated and pulled to create the optical fiber.

The researchers used their new technique to fabricate a preform equivalent of a standard germanosilicate fiber that could be used to create multi- or single-mode fibers, depending on drawing conditions. Although they did observe high light losses in the initial fabricated optical fibers, they have since identified the causes for these losses and are working to address them.

“The new technique worked surprisingly well and can be applied to a range of glass material processing to improve other types of optical components,” said Canning. “With further improvements to limit the light losses, this new approach could potentially replace the conventional lathe-based method of making silica optical fibers. This would not only reduce fabrication and material costs but also lower labor costs because training and hazards are reduced.”

The researchers are interested in working with a mainstream commercial fiber fabrication company to improve and commercialize the technology. They also plan to explore other methods for accelerating 3D printing by refining it for different applications.

Silicon Photonics on the Path of Progression