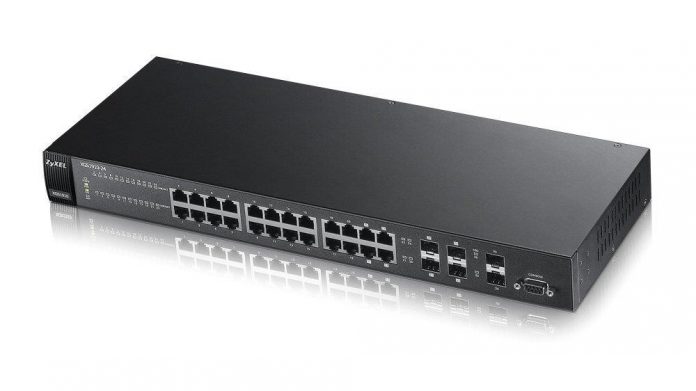 Zyxel, the industry leader in next generation networking solutions has announced the availability of the XGS4600 Series, as an upgrade of the current XGS4500 Series. The XGS4600 Series is a premium line of 28-port Gigabit Layer 3 Managed switches with 4 SFP+ Uplink that come in two models: XGS4600-32 and XGS4600-32F.

802.11ac has changed the way businesses support the large quantity of devices connecting to their corporate networks. Such demands are commonly found in hotels, schools, SMBs and many other places where activities like multimedia streaming, VoIP, video surveillance and constant connectivity among multiple users can easily overload the network and reduce business productivity.

Zyxel XGS4600 Series boasts highly stack ability and fault-tolerant networks, allowing for physical stacks up to 4 units created through one or two 10-Gigabit SFP+ slots, managed as one switch. The innovative, flexible stacking topology under the ring architecture ensures the system quickly recovers through another stacking connection in case one of the stacking links fail. The XGS4600 Series is designed to support active-standby power redundancy to trigger backup power supply to take over in case the main power supply fails.

Future-proof network design for the easiest data migration and management:

Quick, painless and successful migration path from IPv4-based networks to a full IPv6 infrastructure has been on the minds of millions of IT departments around the world. The XGS4600 Series can be managed via CLI which is consistent with Zyxel managed switches. As the IP address scheme evolves to accommodate a growing number of network devices, the Zyxel XGS4600 Series assures excellent protection for any enterprise’s investments in future network upgrades. In addition, Zyxel team has embedded an ultra-intuitive Web-based GUI to further increase the productivity of skilled network administrators.

“As every enterprise’s networking ally, Zyxel XGS4600 Series helps reduce maintenance efforts as well as the Total Cost of Ownership (TCO) for enterprise users”, said Crowley Wu, senior AVP of Zyxel Networking Business Unit. “Today’s mobile devices are consuming more bandwidths than ever, so naturally the business segments where heavy bandwidth activities happen all the time are turning to Zyxel for solutions.”

Focused on innovation and customer-centricity, Zyxel Communications has been connecting people to the Internet for nearly 30 years. Our ability to adapt and innovate with networking technology places us at the forefront of creating connectivity for telcos and service providers, business and home users.

Zyxel is building the networks of tomorrow, unlocking potential, and meeting the needs of the modern workplace — powering people at work, life, and play. Zyxel, Your Networking Ally.