Will Hydrogen Become the Preferred Fuel Source for Sustainability 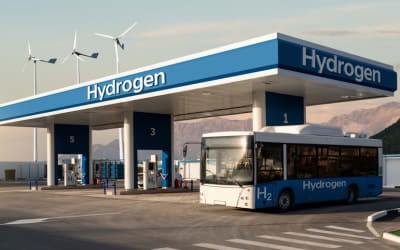 Fossil fuels have been extremely effective in powering the human desire to improve living conditions on earth. They have provided the basis for controllable heating, lighting, mobility, and economic activity; to name a few. Qualities that have made them so successful in this include their high energy density and easy transportability, either in bulk or for individual use.

However, there are major drawbacks, including their finite nature and the fact that typical usage – burning – releases greenhouse gases and particulates into the environment. Either of these, alone, is enough to warrant a search for alternatives. Together, they create an even greater imperative. Human nature being what it is, we want an alternative that not only overcomes these issues but that can help further improve our quality and standards of living.

Hydrogen, the simplest known atom, is a candidate that ticks many of the boxes as a sustainable fuel of the future. It is abundantly available on earth and a theoretically limitless resource. It can be used as an energy-storage medium with the advantage of portability, able to be distributed through pipes or pressurised and stored in tanks. One problem, however, is that hydrogen has about one-third the calorific value of methane, the compound made up of Hydrogen and Carbon CH4.

There are several industrial applications for hydrogen as a replacement for fossil resources, that can help to reduce carbon-based emissions. These include electricity generation by electrolysis in fuel cells, use as a combustible fuel in combined heat and power (CHP) systems, and as a reducing agent in manufacturing processes such as iron and steel production.

Although plentiful on earth, hydrogen exists naturally only in compounds like water (H2O) and hydrocarbons such as coal and methane, or natural gas (CH4). It must be separated for industrial use, and there are several grades of hydrogen depending on the source compound and method of separation. There is no international standardisation for these grades, although widely recognised classes include grey, blue, and green hydrogen. 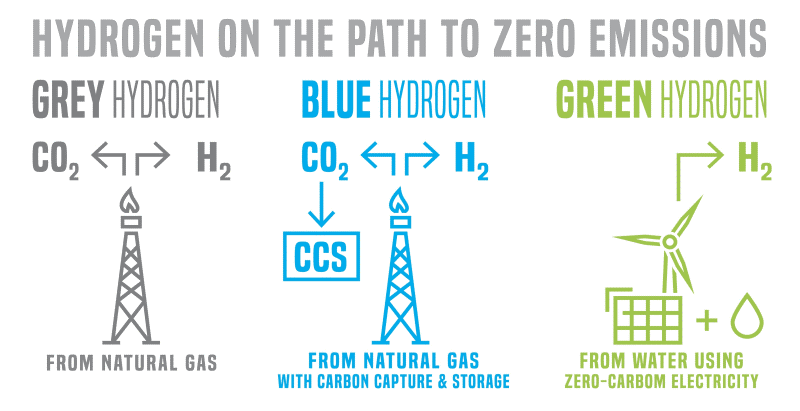 Grey and blue hydrogen are produced from natural gas using thermal processes like steam-methane reforming and partial oxidation. According to the US Office of Energy Efficiency & Renewable Energy, these account for 95% of US hydrogen production.

Steam-methane reforming uses steam at 700–1000°C, with a catalyst, to react with methane at a pressure of 3–25 bar. The reaction produces hydrogen, carbon monoxide, and a small quantity of carbon dioxide. The carbon monoxide and steam are then subjected to a water-gas shift reaction that produces carbon dioxide and more hydrogen. The carbon dioxide and other impurities are then removed from the gas using pressure-swing adsorption, leaving pure hydrogen. Steam reforming can also be used to produce hydrogen from other hydrocarbons such as ethanol, propane, and gasoline.

Partial oxidation, on the other hand, involves causing natural gas to react with a quantity of oxygen that is insufficient to completely oxidise the hydrocarbons to produce carbon dioxide and water. Instead, the reaction produces hydrogen and carbon monoxide. A water-gas shift reaction then produces more hydrogen and a quantity of carbon dioxide from the carbon monoxide.

Hydrogen produced from natural gas reforming is referred to as grey hydrogen if the carbon dioxide generated is vented to the atmosphere. Alternatively, the by-products may be captured. In this case, the hydrogen is referred to as blue hydrogen. According to the US environment think tank, Center for Climate and Energy Solutions (C2ES), more than 90% of CO2 emissions from power plants and industrial facilities can be captured. It can be stored or used in processes such as oil recovery and the manufacture of fuels, urea, and building materials.

Other grades include pink hydrogen, which is produced by electrolysis powered by electricity from nuclear power.

Fuel cells convert chemical energy into electrical energy – as does a battery. Unlike a battery, the fuel cell can operate for as long as fuel is supplied. Fuel cells are also unaffected by known drawbacks of batteries, such as their weight, recharge time, and reliance on rare minerals such as lithium.

Hydrogen is probably regarded as the de facto fuel for fuel cells, although they can be designed to use others such as bio-ethanol. The hydrogen fuel cell generates electricity through an electrolytic process that also produces heat and water. 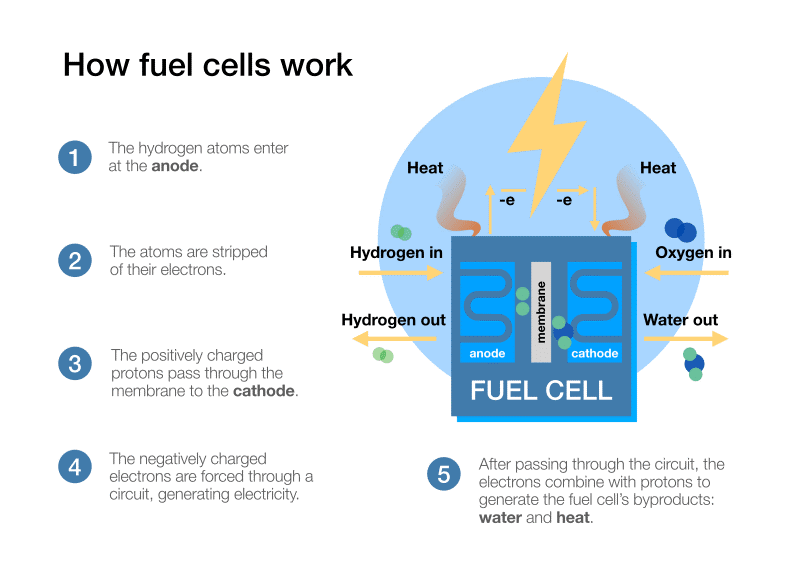 The electrical energy produced can be used to power various loads. One topical example is the traction motor in hydrogen fuel cell vehicles. These may be passenger cars or heavier vehicles such as trucks and buses. Information Trends has predicted that the market for trucks and commercial vehicles will exceed 800,000 units per year by 2035 and suggests that heavy-duty trucks will be the primary market. Compared to battery-powered vehicles they benefit from a greater range, greater power, and easier refuelling. Battery power is expected to dominate initially among smaller electric trucks and vehicles such as private cars until hydrogen becomes more pervasive.

Like batteries, fuel cells can address wider applications as a power source for electrification, such as energising auxiliary power units (APUs) on-board large vehicles such as trucks, trains, ships, and buses. Hydrogen APUs can deliver more than 60% reduction in emissions compared to truck engine idling.

The rationale behind combined heat and power (CHP) systems is to eliminate the inefficiencies associated with sourcing heating and electricity through separate dedicated suppliers. Conventional power stations discharge about two-thirds of the energy released by burning fossil fuels into the atmosphere in the form of heat. The electricity generated is then distributed through the grid, incurring losses on the way, and consumed by industrial and domestic sites that typically also operate a gas-fired boiler to provide heating.

CHP consolidates the production of both electricity and heat close to the point of use. It can be operated as a standalone resource or integrated with a microgrid that may contain various other forms of electricity generation, such as solar and wind. The waste heat from electricity generation is recovered and used to replace or complement heat from the boiler. The fuel otherwise consumed in the boiler – and hence its carbon emissions – can be reduced or eliminated. Local generation also saves electricity transmission losses. The overall efficiency of a CHP system can be around 75%.

The CHP engine may be a turbine, such as a steam turbine or combustion turbine, or can be a reciprocating engine, or a fuel cell. Converting fossil-fuelled CHP units to use hydrogen as a combustible fuel is a logical step to further reduce carbon emissions associated with electricity generation and heating. With modifications to components such as valves and seals, as well as engine-management sensors and software, a CHP engine can be made to run on pure hydrogen or a combination of natural gas and hydrogen – either alternately or as a mixture.

Industrial processes that involve chemical reduction – such as producing iron, which involves removing oxygen from raw ore – traditionally rely on coal, oil, or natural gas. In a typical blast furnace, or basic oxygen furnace (BOF), the fossil fuel serves a dual purpose both to heat the furnace and as a source of hydrogen as the chemical reducing agent, released during combustion. About 50% of European iron is produced using BOF.

Conventional fossil sources are hydrocarbons that produce carbon-containing by-products. New processes that lessen or eliminate their use can help to de-carbonise these industries. Two main approaches use pure hydrogen as an alternative reducing agent: H2-BF (hydrogen blast furnace) is an adaptation of the BOF. The alternative, H2-DRI (direct reduced iron), could eliminate reliance on coal as part of the reduction equation. However, the source of energy for heating the blast furnace will probably not be hydrogen for some time, although studies are ongoing.

Hydrogen has diverse potential uses in the race to decarbonise transportation, industry, and daily living. Although burning hydrogen, notionally releases a great deal of energy, hydrogen combustion engines are typically used in a small number of instances such as CHP systems. Other reactions such as electrolysis to generate electricity, and as a carbon-free reducing agent in industrial processes are also extremely effective uses for hydrogen’s potential to power the economies of the future. Production and transportation costs plus the relative lack of hydrogen infrastructure are key barriers to widespread adoption. While alternatives, such as fossil fuels and battery energy storage, remain economically viable, subsidies may be needed to enable the hydrogen economy to take off.