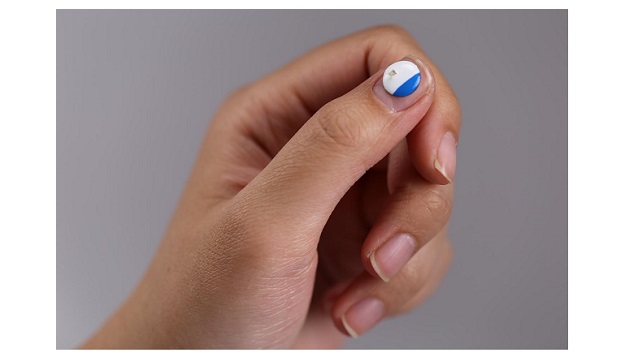 A wearable, battery-free sensor has been developed that can measure and monitor exposure to light across multiple wavelengths, from the UV to the VIS to the IR regions. The device, created by researchers at Northwestern University, can record up to three wavelengths at one time.

The sensor features a system-on-a-chip design that allows wireless, smartphone-based access to an individual’s sensor-read solar exposure data. Light passes through a window in the sensor and strikes a millimeter-scale semiconductor photodetector. The photodetector produces an electrical current with a magnitude proportional to the intensity of the light. This current passes to a capacitor, where the associated charge is captured and stored. A communication chip embedded in the sensor reads the voltage across the capacitor and passes the result digitally and wirelessly to the user’s smartphone. At the same time, it discharges the capacitor, thereby resetting the device.

Healthy volunteers wore the new sensor over a four-day period. The researchers observed that the devices remained functional and reliably recorded UVA solar radiation doses, even in water. The device was also used to monitor therapeutic UV light in clinical phototherapy booths for psoriasis and atopic dermatitis and blue light phototherapy for newborns with jaundice in the neonatal intensive care unit. Its ability to measure white light exposure for seasonal affective disorder was also tested. The researchers fabricated sensors in different shapes and sizes.

Light wavelengths interact with the skin and body in different ways, the researchers said. In addition, the intensity of the biological effect of light changes depends on weather patterns, time, and space.

“Being able to split out and separately measure exposure to different wavelengths of light is really important,” professor John Rogers said. “UVB is the shortest wavelength and the most dangerous in terms of developing cancer. A single photon of UVB light is 1,000 times more erythrogenic, or redness inducing, compared to a single photon of UVA.”

The new sensor measures the amount of light that patients receive from phototherapy, which could help doctors target and optimize the therapy. The research team is particularly excited about using the device to measure the entire UV spectrum and total daily exposure. “There is a critical need for technologies that can accurately measure and promote safe UV exposure at a personalized level in natural environments,” said Steve Xu, M.D., a Northwestern Medicine dermatologist. “Right now, people don’t know how much UV light they are actually getting. This device helps you maintain an awareness, and for skin cancer survivor, could also keep their dermatologists informed.”

The Northwestern team has collaborated with L’Oreal to make a UVA version of the sensor, “My Skin Track UV,” commercially available.