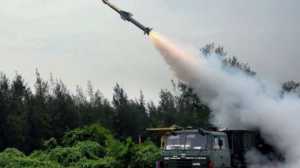 DRDO (Defence Research and Development Organisation) announced that some weapons systems and platforms made by them, which are worth over Rs. 2.75 lakh crore, will be inducted into service soon.

G Satheesh Reddy, DRDO’s Chief, said that the R&D organisation’s recent successes in radar and missile technologies has helped in consolidating the trust of India’s defence forces in his organisation.

“We have lot of strength in the area of missiles. We are strong in radars, and torpedo technologies and then we are very good in airborne early warning systems and electronic warfare domain,” he said.

He further added that Defence Acquisition Council has granted its approval for DRDO technology-based products worth Rs 2.75 lakh crore.”A lot more products are also in the process which would be worth much more. Some of them are already inducted in the services while some would be joining in future,” he said.

The DRDO chairman listed the Advanced Towed Artillery Guns, Nag anti-tank guided missiles for the Army, SONAR and heavy-weight torpedoes for the Navy along with the Akash air defence missile systems which would be used by both the Air Force and the Army for protecting the Indian air space.

As per estimates, the Army has a requirement of more than 50,000 anti-tank guided missiles for its different forces. Reddy said that if the requirement of the force is urgent and required to be completed in short time, the DRDO can also engage the private sector to do the needful.

DEFCOM India, 2017: Matrix to showcase its Enterprise-grade Defence Telecom and...