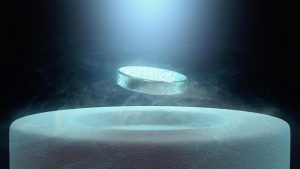 Understanding superconductivity (or the lack thereof) on the nanoscale is expected to be important for designing future quantum computers, among other applications. In the new study published in Nature Communications, Sergio Vlaic and coauthors at the University Paris Sciences et Lettres and French National Centre for Scientific Research (CNRS) designed a nanosystem that allowed them to experimentally investigate the Anderson limit for the first time.

To investigate what happens to the superconductivity of objects around the Anderson limit, the scientists in the new study prepared large quantities of isolated lead nanocrystals ranging in volume from 20 to 800 nm3.

The results not only validate the Anderson conjecture, but also extend to a more general area, the Richardson-Gaudin models. These models are equivalent to the conventional theory of superconductivity, the Bardeen Cooper Schrieffer theory, for very small objects.

“Our experimental demonstration of the Anderson conjecture is also a demonstration of the validity of the Richardson-Gaudin models,” coauthor Hervé Aubin at the University Paris Sciences et Lettres and CNRS told Phys.org. “The Richardson-Gaudin models are an important piece of theoretical works because they can be solved exactly and apply to a wide range of systems; not only to superconducting nanocrystals but also to atomic nuclei and cold fermionic atomic gas, where protons and neutrons, which are fermions like electrons, can also form Cooper pairs.”

On the more practical side, the researchers expect the results to have applications in future quantum computers.