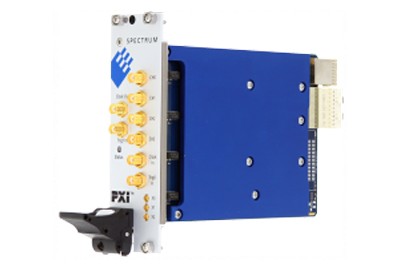 Each channel is equipped with its own analogue-to-digital converter (ADC) with real-time signal sampling at rates from 1.25 GS/s to 5 GS/s and scope-like signal conditioning circuitry that allows programming of parameters such as input gain, signal offset and coupling.

They offer bandwidth up to 1.5 GHz making them suitable for automated testing applications where wide-band electronic signals from DC to the GHz range need to be acquired and analysed. Typical applications include semiconductor and component testing, radar, wireless and digital communications, laser and optical systems, automotive, power, physics, surveillance, medical science, aerospace and defense.

The front-end circuitry of the M4x.22xx series digitisers is complemented by a trigger system, an on-board acquisition memory of 4 GSamples and a host of data acquisition and readout modes. The combination makes it simple for the cards to capture complex signals as well work with other modules in a test system.

All the M4x.22xx series digitisers are packaged in a dual width 3U module, which incorporates a four lane PCI-Express Generation 2 interface. The interface allows data transfer speeds in excess of 1.7GB/s making the cards suitable for use in PXIe mainframe systems. For rapid waveform display and analysis, acquired data can be transferred to an embedded or external processor. In addition, data can be shared with other modules like arbitrary waveform generators (AWGs) to create more sophisticated capture-replay or stimulus-response, testing scenarios.

Units are shipped with a host of software tools so that users can create their own control programs with most programming language. This includes C++, Visual Basic, VB.NET, C#, J#, Delphi, Java and Python code. Third party software support is also provided for LabVIEW, LabWindows and MATLAB.