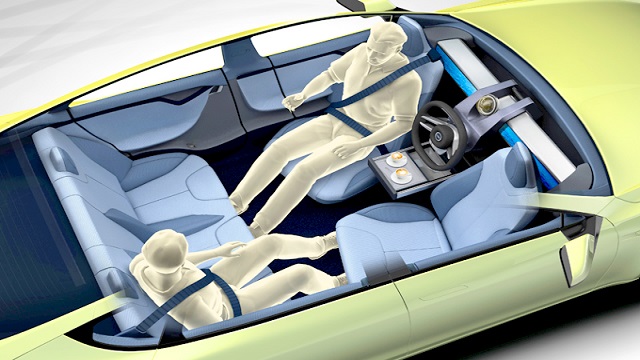 As Japanese carmakers race to put autonomous vehicles on the road, one of their biggest suppliers is developing the technology to put smaller self-driving vehicles to work in assembly plants.

Panasonic Corp. has developed a lidar system to automate the robotic runabouts that shuttle parts to and fro on factory floors.

Those vehicles typically snake their way through factories by following magnetic strips on the floor. But Panasonic envisions an autonomous approach, enabling the carriers to navigate freely with the help of onboard sensors, much the way self-driving cars do.

By 2025, most such robots will be autonomous, rather than guided, Panasonic predicts.

The supplier has developed a 3-D laser scanner it plans to put into mass production before March 31, 2019. Sample shipments begin in January.

The 3-D system, Pansonic’s first lidar product, will operate much as tech suppliers want future on-road vehicles to work. It can scan in a 270-degree arc around the vehicle. It also takes in a wide vertical angle to capture potential obstacles from floor to ceiling.

Its sensing range is too short for highway use. But scanning in all directions with one sensor is key inside assembly plants, where the bustle of activity is intense and chaotic. It also eliminates the extra cost of using multiple lidars.

It also uses two tiny motors to spin mirrors that reflect the lidar’s laser beam. The spinning mirrors allow the laser to scan a wide perimeter. But they would be prone to being jostled and breaking down in everyday driving on bumpy public roads.

Panasonic also is studying the development of lidar for self-driving on-road vehicles. But costs need to drop to less than $100 a unit and the technology isn’t there yet, said Akihiro Arai, a manager for sensor development at Panasonic’s automotive and industrial systems unit.

The 3-D lidar sensor is one of two technologies Panasonic has unveiled since the beginning of September. It also introduced a driver detection system that can tell whether the person behind the wheel is nodding off. A camera and infrared sensor monitor facial expressions and body temperature, while a computer processes the feedback with artificial intelligence.

Panasonic’s goal is to predict driver sleepiness before the driver starts to nod off.

When fatigue sets in, the system jumps into action to keep the driver awake by automatically adjusting the cabin temperature and airflow. Panasonic said it is eschewing buzzers or warning bells for a more natural, less-jolting approach to drowsiness control.

Panasonic plans to start sample shipments of its drowsiness detector this month.