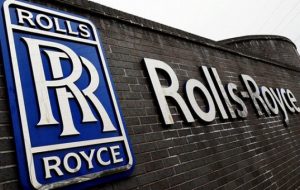 Rolls Royce India is geared up to with its newly established engineering centre in Pune that supports the company’s marine and power system business. This has been fanned by the driving ambition of etching its name in Indian defence manufacturing arena, with an objective to turn India into a manufacturing hub.

“With a growing engineering footprint in India, we are keen to support India’s indigenisation ambitions by collaborating with strategic partners in the country.

“We are looking to establish a robust ecosystem that will engage in co-creation across the entire value chain, from research, design and development to manufacturing, maintenance and repair,” Jayaraman added.

The company has teamed up with Garden Reach Shipbuilders and Engineers (GRSE), a defence shipyard associated with the Indian Navy, to help assemble naval engines in the country. The MTU Series 4000 engines from Rolls-Royce Power Systems are to be assembled at GRSE’s plant in Ranchi, and will be installed in a wide range of naval vessels constructed by GRSE.

“The relationship (with GRSE) began with the assembly of MTU Series 538 and 396 engines at the Diesel Engine Plant (DEP) in Ranchi. Since 2004, GRSE has been assembling Series 4000 engines, which are best in class in terms of reliability and availability in India. GRSE has already assembled more than 100 MTU engines so far,” Jayaraman said.

MTU is a brand of Rolls-Royce Power Systems. Praveen Mohan, CEO of MTU India, says that local production of parts was a natural progression since “MTU has been focusing on building partnerships in India and GRSE has been a very reliable and excellent licensee partner for us.”

With Rolls-Royce, GRSE is looking to achieve 40 per cent indigenous content progressively for the MTU 4000 series engines. The agreement between the two companies also includes plans for the transfer of MTU technology related to assembly, testing, and painting, in addition to an option for the local production of parts in the near future.

India’s “inherent advantages” was a major pull for the UK firm, according to Jayaraman. “The region has a lot to offer by way of cost competitiveness, skilled talent as well as growing engineering and manufacturing capabilities.”

A combination of all these factors enabled the firm to drive increased growth for the Rolls-Royce group, he said.

“We hope to leverage on the high technology and cost competitive sourcing in India across engineering, manufacturing capability, and supply chain activities, as well as capturing indigenous market opportunities,” he added.

DRDO Hands Over First LRSAM to Indian Ministry of Defence