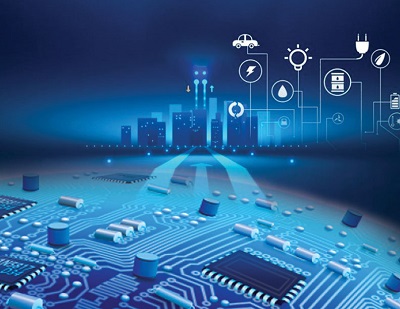 In power systems it is often desired to eliminate harmonic content found in line currents. VSIs can be used as active power filters to provide this compensation. Based on measured line currents and voltages, a control system determines reference current signals for each phase. This is fed back through an outer loop and subtracted from actual current signals to create current signals for an inner loop to the inverter. These signals then cause the inverter to generate output currents that compensate for the harmonic content. This configuration are catalyzed by power electronics and consumption application, as it is fully fed by the line to improve the overall power factor.

Power electronics and converters made a head start when the first device the Silicon Controlled Rectifier was proposed. It is the technology associated with the efficient conversion, control and conditioning of electric power by static means from its available input form into the desired electrical output form. In general, inverters are utilized in applications requiring direct conversion of electrical energy from DC to AC or indirect conversion from AC to AC. DC to AC conversion is useful for many fields, including power conditioning, harmonic compensation, motor drives, and renewable energy grid-integration.

In facilities that require energy at all times, such as hospitals and airports, Power electronics systems are utilized. In a standby system, an inverter is brought online when the normally supplying grid is interrupted. Power is instantaneously drawn from onsite batteries and converted into usable AC. In an online UPS system, a rectifier-DC-link-inverter is used to protect the load from transients and harmonic content. A battery in parallel with the DC-link is kept fully charged by the output in case the grid power is interrupted, while the output of the inverter is fed through a low pass filter to the load. High power quality and independence from disturbances is achieved.

Therefore, these batteries are employed in applications where high quality control is not required. On the other hand, vector-controlled drives allow for instantaneous current and voltage values to be controlled continuously. This high performance is necessary for applications such as elevators and electric cars.

Inverters are also vital to many renewable energy applications. The inverter then converts this into an AC voltage to be interfaced with either a load or the utility grid. Inverters may also be employed in other renewable systems, such as wind turbines. In these applications, the turbine speed usually varies causing changes in voltage frequency and sometimes in the magnitude. In this case, the generated voltage can be rectified and then inverted to stabilize frequency and magnitude.

Power electronics has been an aid for rectification and stabilizing application

Scientists have developed many applications of electronics engineering. Electricity, the main supply of power is one such good application. Conversion of sources of energy is nothing however electricity. It is the technology associated with efficient conversion, control and conditioning of electric power from its available input into the desired electrical output form.

Mostly the output of generator is always AC, but in some applications we need DC supply, where we get optimum utilization of efficient power with respect to applications example different types of sockets, connectors, switches, and fixtures. High-voltage direct current (HVDC) electric power transmission systems use DC for the bulk transmission of electrical power. Whereas, in some cases we need AC supply and we are supplied with DC quantity there, example transformers, 3Ø motor, etc. In such cases we need to convert AC to DC or DC to AC. These are used in a variety of industrial and consumer application:

SMPS concept is based on the power electronics devices such as semiconductor devices that operates in an on state that has zero voltage and an off state that has zero current during this state theoretically with 100% efficiency. To switch these power semiconductor devices on and off the pulse width modulation (PWM) technique is used. Less bulky and small-sized power electronics based converters are used for high frequency switching as these switches are capable of operating under high switching frequencies.

There are different DC to DC converter topologies available which can be used based on the requirements. These topologies are classified as isolated and non-isolated topologies which are adopted in power train systems. The application of power electronics in switching has brought a concept of soft-switching where the switches are subjected to low stress using an LLC or resonant mode. These soft-switching, highly reliable and long life converters are very useful in the automotive electronics market. There are bidirectional converters such as 400 to 12V for electric vehicles and 48 to 12V for hybrid electric vehicle or internal combustion engine.

Electrical motors are machines used for converting electrical energy into mechanical energy and primarily DC motors are used for this purpose, but due to the unreliability of DC motors, AC motors are used because of their efficiency. Application of power electronics in building controllers for AC motors has tremendous progress from the past two decades. Thus, for AC motors to supply power, power stored in batteries of the automotive electrical and electronic systems of electric vehicles or hybrid electric vehicles or ICE require the application of power electronics such as DC to AC converters or electrical inverters.

Vehicles with automotive electronics consist of batteries that need to be charged; for this charging purpose, the supply AC power has to be converted into DC. We know that, the power can be stored in batteries only in the form of DC. This conversion of AC to DC can be done by the application of power electronics converters called as rectifiers.

The application of power electronics is increasing with the advancing technologies in automotive electrical and electronics systems for improving the overall system efficiency with high operating temperature, increasing flexibility, reliability and to reduce the overall size of the circuitry.

Advertising, heating, air-conditioning power supplies, computer, office equipment, elevators, light dimmer, uninterruptible power supplies, central refrigeration. Both in aerospace and satellite power supplies are Switch Mode Power Supply (SMPS) type power supply. Here, the power semiconductor switch is located in between input and output supply lines. It act as a static switch. It continuously turn on and off the input power and thus the converts the input power into required output power. Such kind of power supplies have more advantages than conventional linear power supplies. The comparison of SMPS with linear Power supply is discussed in separate post.

The Asia Pacific region holds the largest share of the market across the globe followed by North America and Europe. China, Japan, and India are dominating the Asia Pacific market due to technological enhancements and rising trend of energy harvesting technologies in the region. Moreover, the region has well-established infrastructure, which can easily implement advanced technologies. . Additionally, the growing adoption of the internet of things and rise in demand for hybrid and electric vehicles are major factors driving the growth of the power electronics market in the region.

Consumer products such as laptops, televisions, smartphones, LCDs, computers, and DVDs are primarily supported by the integrated power electronics technology. The swift adoption of advanced technologies and the need to maintain stable power supply in these devices are the key factors responsible for the escalating consumption of power electronic solutions in the consumer electronics industry.

Further, the technology application has increased, owing to the emergence of semiconductor devices and microprocessors. Moreover, the development and use of wide band gap (WBG) semiconductor devices is expected to result in a breakthrough in the power electronics industry. This can be attributed to the use of superior materials such as SiC, and GaN, among others that allow devices to operate at high speeds, voltage, and temperature.