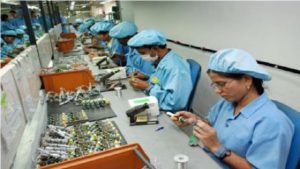 In order to strengthen the ongoing momentum in domestic production of electronic goods, the government is looking at drafting a new electronics manufacturing policy and as a first step, a consultation with the industry and other stakeholders is slotted for the last week of September.

According to a senior official of the ministry of electronics and IT (MEITY), work has already started on new draft.

“The idea is that we have reached a certain level of momentum, now how do we take off from there,” Ajay Kumar, additional secretary, MEITY told media. One of the big focus areas of the current government has been to develop India not only as a domestic manufacturing hub but also as a large-scale export destination.

Kumar added that due to continuous efforts of the last few years, India has already taken a lead in the areas such as mobile manufacturing, automotive, LED and consumer appliances.

“Now we have to see how we can give focussed attention to all these areas and build them as significant areas and grow the rest at the same time,” said Kumar. An upcoming area is manufacturing of medical electronics, added Kumar. The new policy will also relook at the incentives which are offered by the government under the existing policy which expires next year.

Sops under the Modified Special Incentive Package Scheme (M-SIPS), are valid till 2018 and the government will accept new proposals under it till December of 2018, he said. Electronics and IT minister, Ravi Shankar Prasad had first said in July that the government will come out with a new electronics manufacturing policy which will be better aligned to the present times.

He was speaking after a high-level meeting with tech industry captains including Rishad Premji of Wipro, Rajan Anandan of Google, Vanitha Narayanan of IBM and Kavin Bharti Mittal of Hike meant as a brainstorming session to draw a blueprint for the $1 trillion digital economy.

The government had first unveiled an Electronics Manufacturing Policy in the year 2012 which included schemes such as M-SIPS, electronic clusters, electronic development fund. The new electronics policy will also help in realising the Modi government’s goal of ‘Net Zero imports’ in electronics by 2020.”

Electric Vehicle Policy Cleared by Gadkari, Plan for 2030 Still on...