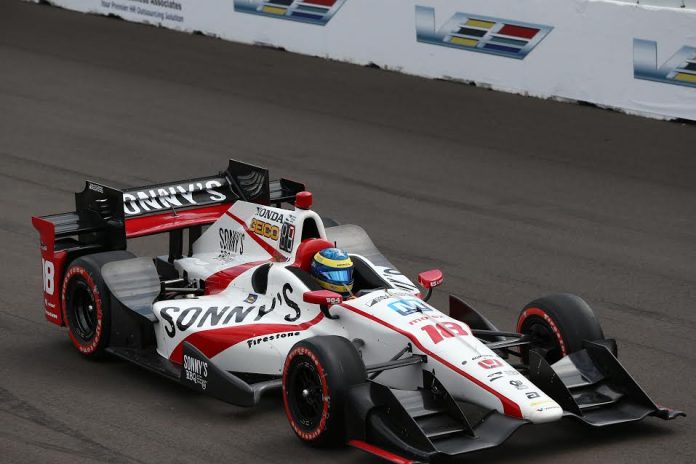 Following a standout performance at the storied Indianapolis 500 by substitute driver James Davison, former Formula 1 driver Esteban Gutierrez and the Mouser-sponsored No. 18 car are gearing up for the two-day Detroit Grand Prix, starting June 3. During day one of Indy 500 qualifying, driver Sebastien Bourdais’ car flipped and burst into flames, sending Bourdais into surgery for multiple fractures to his pelvis and a broken right hip. Bourdais was off to a strong start this season, winning the opening race, the Firestone Grand Prix of St. Petersburg.

With Bourdais in recovery, his Indy 500 replacement, Davison, faced the challenges of a last-place start and an unfamiliar car. By the second half of the race, Davison had gained 23 positions, powering into the top 10 and taking the lead on lap 166 to achieve a spectacular last-to-first performance. Davison was on his way to a top-10 finish until he was caught up in a multi-car crash with just 17 laps to go.

“Our thoughts are with Sebastien and his recovery, but it was amazing to watch James become the first driver since 1980 to lead the Indy 500 after starting in the last position,” said Todd McAtee, Mouser Electronics’ Vice President, Americas Business Development. “The entire team is rallying despite these difficult circumstances. We at Mouser know that succeeding in the midst of adversity is the mark of true professionals. We are excited to welcome Formula One pilot Esteban Gutierrez as he makes his IndyCar debut in the Mouser-Molex Machine this weekend in Detroit.”

After two years as test driver, Gutierrez raced in Formula One full-time with the Sauber F1 team from 2013 to 2014. He then moved on to join Scuderia Ferrari as test driver in 2015 before competing for a full season with the Haas F1 team in 2016.

Mouser Electronics, the authorized global distributor with the newest semiconductors and electronic components, is proud to partner with valued supplier Molex to sponsor the No. 18 car of the Dale Coyne Racing team in this year’s Verizon IndyCar Series. The 2017 season marks the 22nd season of the series.

“Molex is committed to hard work and high performance just like this hard-charging team. We are hopeful that Sebastien will soon be back in the driver’s seat,” said Fred Bell, Vice President of Global Distribution for Molex. “We wish Esteban the very best of luck this weekend. As a sponsor of the Number 18 IndyCar with Mouser, we’re highlighting our commitment to developing and applying new solutions that move the auto industry forward.”

Mouser first sponsored IndyCar racing in 2011 as an inventive way to communicate its performance-driven business model and promote the newest technologies and how they affect the high-tech world of IndyCar racing. The Mouser- and Molex-sponsored car won the Indianapolis 500 in 2013.

After the Detroit Grand Prix on June 3–4, the series takes over the Texas Motor Speedway in Fort Worth on June 10. The series will feature eight more events, culminating with the season finale on September 17 at Sonoma, California.