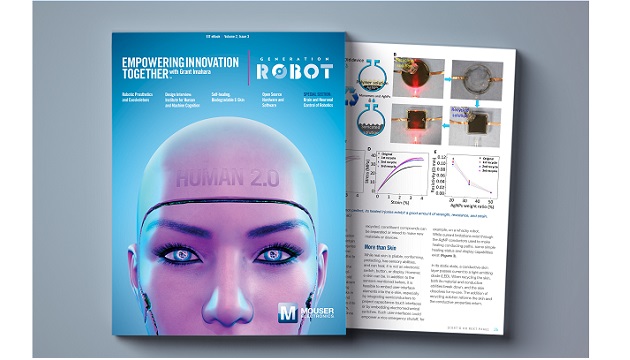 Mouser Electronics, Inc., the authorized global distributor with the newest semiconductors and electronic components, announces the release of its newest e-book titled Human 2.0, the most recent offering in the Generation Robot series, part of Mouser’s Empowering Innovation Together program.

The Human 2.0 e‑book features a foreword from celebrity engineer and Mouser spokesperson Grant Imahara, and topics covered include the use of robotics in injury repair, sensor technology in prostheses, and the development of self-healing electronic skin that functions like human skin. A special section explores brain and neuronal control of robotic exoskeletons and limbs, examining both the myriad challenges facing this technology, as well as the recent breakthroughs that could make brain-control and neuronal-control interfaces a reality.

“The newest e-book in the Generation Robot series features a number of intriguing articles from the industry’s thought leaders on recent achievements and potential developments in human augmentation with robotics,” said Kevin Hess, Senior Vice President, Marketing at Mouser Electronics. “Previous e-books have explored the possibilities of humans and robots working collaboratively. In this edition, we examine the potential benefit of integrating robotic components into humans themselves”, he added.

The Generation Robot series, hosted by Imahara, features five videos filmed in locations around the world, highlighting the people, companies and machines that are changing how we view and interact with robots. The series showcases everything from robotic theory to real-world robotic use cases that seem like science fiction but are, in reality, a glimpse at how we will navigate in an equally human and robot world. The Generation Robot series is supported by Mouser’s valued suppliers Analog Devices, Intel, Microchip Technology and Molex.