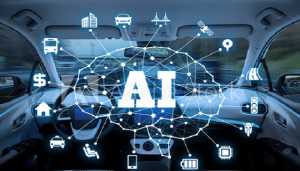 Photodetectors are the devices that convert information carried by light into an electric signal that can be processed by electronic circuits and computers. They are found in everyday devices, such as television remotes and motion sensors, and they are a key component in many artificial intelligence and Internet of Things (IoT) technologies. But the largest, and fastest growing market for them is in data centers and telecommunications — where tens of millions of them are deployed each year to accommodate the skyrocketing storage demands of our computing technology.

The growth in these industries has made the photodetector a high-demand product, but their fabrication requires expensive materials, such as gold and titanium, and highly controlled conditions produced by capital-intensive equipment with high maintenance costs.

Researchers at Drexel University recently reported on a new way to make the sensors, using a type of two-dimensional material called MXene, that improves their sensitivity and substantially cuts production costs.

In their research, which was recently featured in the journal Advanced Materials, the group shows how replacing gold with a translucently thin layer of MXene material can make it possible to scale up the photodetector production process and churn out sensors that are superior to the current — gold — standard.

“This is an important development because worldwide demand for photodectors is expected to reach $2 billion by the year 2024, so there is a pressing need to scale up the process and find more sustainable materials to use as components,” said Pouya Dianat, PhD, an assistant research professor in Drexel’s College of Engineering and a co-author of the paper.

Photodetectors transform light radiation into an electric current. They typically use gold as their contact material to connect the detector material to the rest of the circuitry because it’s highly conductive. These detectors are increasingly common in a range of applications that require the rapid transmission of volumes of data, such as automated assembly, packing and delivery systems that are growing to accommodate the explosion of online shopping. Towering racks of them are used in warehouse-size data centers to beam information across the buildings that can span the area of four football fields.

Because MXenes, which are two-dimensionally thin layered materials, are versatile enough to remain highly conductive when applied in a variety of forms — from spray-paint, to clay, to ink — they have emerged as an appealing candidate for use, in transparent film form, as electrodes in photodetectors.

“One of the greatest challenges of fabricating photodetectors is the deposition of gold contacts. In addition to the cost of the gold itself, the fabrication process must be performed at a high-temperature and in vacuum chamber, which is also quite costly,” said Kiana Montazeri, a doctoral researcher and lead author of the paper. “We are replacing gold with MXenes, which are less costly materials, and producing the photodetector components by depositing it in ambient conditions using a table-top spinner.”

This thin-film deposition process, works something like placing a blob of ink in a centrifuge and then peeling the resulting splatter off the wall. As a relatively simple process that can be performed in normal atmospheric conditions on a patterned substrate, it can easily be scaled up to mass produce MXene photodetectors.

The sensitivity of photodetectors is linked to the surface area of the photosensitive material. While larger sensors would be more desirable, their size also requires more optical power to operate, and causes the response to be slow. Because they are conductive, MXene films could be used in multiple components of the sensors, thus turning nearly the entire surface of the device into a sensing area, without diminishing its energy efficiency or performance.

“Interest in MXenes has exploded recently for a number of reasons, chief among them is that they can be mixed with water to make sprays and inks while remaining quite conductive,” said Bahram Nabet, PhD, a professor in Drexel’s College of Engineering and a co-author of the paper “Using transparent MXene film as the contacts in photodetectors offers an obvious advantage in that it mitigates the tradeoff between carrier transit distance and responsivity.”

In the paper the researchers report that the MXene film photodetectors they created performed about four times better — in terms of sensitivity — than current devices made with gold. This means that they could be used to make data centers a great deal more energy efficient.

“The next step for this work is to continue to standardize the production process and develop methods for stabilizing MXene components for use in a variety of environments and conditions,” said Michel Barsoum, PhD, Distinguished professor in the College of Engineering. “We expect that this discovery will open the door for using MXene in a wide variety of opto-electronic devices, such as photo-diodes and photo-transistors as well as in enabling technologies such as microelectronics, photonic integrated circuits and silicon photonics.”