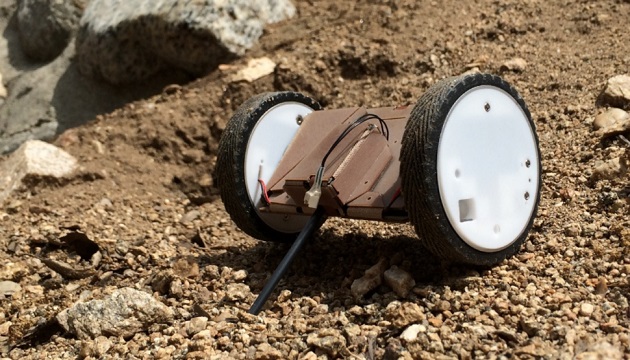 NASA recent technological innovation, known as the Pop-Up Flat Folding Explorer Robot (PUFFER), could open an entirely new area of exploration that full-size rovers physically can’t access. The PUFFER project is a Game Changing Development (GCD) program, which is part of NASA’s Space Technology Mission Directorate, and the project is managed by NASA’s Jet Propulsion Laboratory. According to NASA, the GCD program, “…investigates ideas and approaches that could solve significant technological problems and revolutionize future space endeavors.” A company out of Santa Ana, California called Pioneer Circuits helped to integrate a sturdy textile material called Nomex into the body of the PUFFER, and this material has been used in the airbags of the rovers that have landed on Mars, as well as by firefighters to repel heat, and therefore will enable the PUFFER to endure high temperatures.

These compact bots can fold inward at the wheels, enabling them to navigate tight spaces, and their size allows them to explore treacherous areas like pits, sand dunes, and slopes as steep as 45-degrees. The origami-inspired foldability allows for compact storage as well, so a rover can efficiently carry many bots that will be autonomous, ideally, and enable the bots to act as a mobile team of scouts collecting more information, and doing so in an effective and efficient manner. NASA reports that the PUFFER is capable of driving about 2,050 feet (625 meters) on a single charge, and this limited range is compensated for by the solar panels on its ventral side, so it just has to flip over and it can recharge in the sun. Given that the NASA team plans to make these bots autonomous instead of remotely controlled via Bluetooth, the bot’s range would be capable of being larger than a remote-controlled apparatus, and the solar panel on the underside of the PUFFER lessens these range restrictions even further.

The team at NASA hopes to use the PUFFER in future planetary missions, and already boasts many Mars-compatible materials in its construction including “heritage technology” from the Viking, Pathfinder and Phoenix missions. Also, a company out of Champaign, Illinois called Distant Focus Corporation provided a high-resolution microimager capable of picking up on objects smaller than a grain of sand, and this technology provides a significant benefit to the data collection capabilities.

The microimager is one of a variety different technologies that the NASA team wishes to incorporate into the PUFFER. The device is still a prototype, and NASA’s desire to equip it with more and more scientific instruments ultimately raises the conflict between size/maneuverability and technological robustness/information-collecting capabilities.