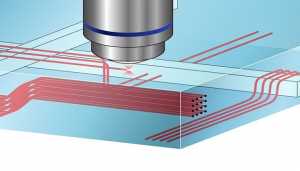 Tiny, flexible waveguides, made in a clear silicone commonly used for biomedical applications, were created by a research team at École Fédérale de Lausanne (EPFL). To create the waveguides, the team used multiphoton laser direct writing, a microfabrication method in which a light-sensitive chemical is polymerized with a focused laser to create finely detailed 3D structures.

The optical waveguides were fabricated in polydimethylsiloxane (PDMS). Phenylacetylene was used as the photosensitive monomer. Phenylacetylene has a higher refractive index once polymerized, compared to traditional materials. The researchers surmised that the refractive index (RI) of the phenylacetylene would be markedly different from the RI of the surrounding PDMS. This would help ensure that the waveguides, although tiny, would be able to confine light efficiently.

“By not using a photoinitiator, we simplified the fabrication process and also enhanced the compatibility of the final device with living tissue,” said researcher Ye Pu.

Waveguides smaller than 1 μm could be possible if the setup was optimized, said the researchers, who are now working to improve the yield of the fabrication process by developing a control system that will help prevent material damage during laser writing. They also plan to create an array of narrow waveguides in PDMS that could be used to construct a flexible endoscope with a diameter of less than 1 mm.

“To the best of our knowledge, these are the smallest optical waveguides ever created in polydimethylsiloxane, or PDMS,” Pu said. “Our flexible waveguides could be integrated into microfluidic lab-on-a-chip systems to eliminate bulky external optics needed to perform blood tests, for example. They might also deliver light for wearable devices such as a shirt featuring a display.” The new, flexible waveguides could also serve as building blocks for photonic printed circuit boards that use high-speed optical signals to transmit data in computers and other electronic devices.