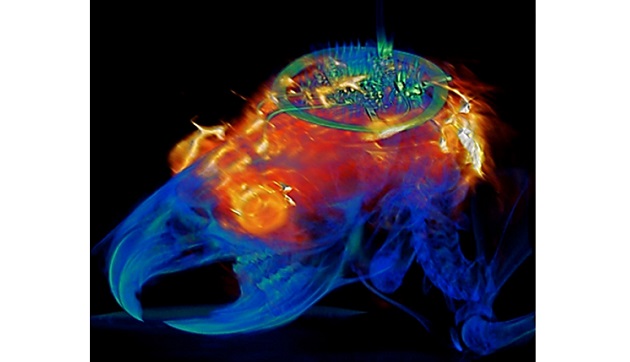 Optogenetics is a biological technique that uses light to turn specific neuron groups in the brain on or off. For example, researchers might use optogenetic stimulation to restore movement in case of paralysis or, in the future, to turn off the areas of the brain or spine that cause pain, eliminating the need for,  and the increasing dependence on, opioids and other painkillers.

“We’re making these tools to understand how different parts of the brain work,” Gutruf said. “The advantage with optogenetics is that you have cell specificity: You can target specific groups of neurons and investigate their function and relation in the context of the whole brain.”

The first iterations of optogenetics involved sending light to the brain through optical fibers, which meant that test subjects were physically tethered to a control station. Researchers went on to develop a battery-free technique using wireless electronics, which meant subjects could move freely.

But these devices still came with their own limitations, they were bulky and often attached visibly outside the skull, they didn’t allow for precise control of the light’s frequency or intensity, and they could only stimulate one area of the brain at a time.

The wireless, battery-free implants are powered by external oscillating magnetic fields, and, despite their advanced capabilities, are not significantly larger or heavier than past versions. In addition, a new antenna design has eliminated a problem faced by past versions of optogenetic devices, in which the strength of the signal being transmitted to the device varied depending on the angle of the brain: A subject would turn its head and the signal would weaken.

Devices are implanted with a simple surgical procedure similar to surgeries in which humans are fitted with neurostimulators, or “brain pacemakers.” They cause no adverse effects to subjects, and their functionality doesn’t degrade in the body over time. This could have implications for medical devices like pacemakers, which currently need to be replaced every five to 15 years.