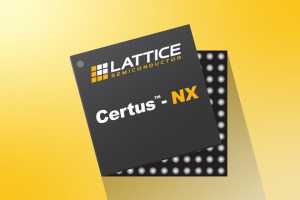 “Thanks to innovations at the system, architecture, and circuit level in our Lattice Nexus development platform, we are releasing new products at a faster pace and giving our customers more options to choose from as they evaluate the performance and power needs of their applications,” said Gordon Hands, Director of Product Marketing, Lattice Semiconductor. “Certus-NX has clearly reset expectations for what developers should look for in general-purpose FPGAs by providing a compelling blend of parallel processing performance and flexible I/O support that enables creative new device designs.”

Technology trends like industrial automation and 5G have developers across markets looking to add processing and connectivity to applications that operate at the network Edge. To successfully support these trends, devices require low power processing hardware with support for popular interfaces like PCIe and Gigabit Ethernet. Device developers also need easy-to-use development platforms from a single source that provide the hardware, software, and IP they need to get products to market quickly.

“As an FPGA-centric design house, we’re seeing increasing adoption of serial protocols like PCIe and Gigabit Ethernet for chip-to-chip connectivity in many end applications, including 5G and IoT systems,” said Sanjeev Kumar, CEO, Logic Fruit Technologies. “The latest generation of FPGAs by Lattice, Certus-NX, supports these standards and provides a high density of I/Os while keeping power consumption and overall device footprint in check. These FPGAs will allow us to rapidly adapt to the challenging and evolving connectivity and performance needs of our customers.”

Key features of the Lattice Certus-NX FPGA family include:

ETSC Technologies Co. Ltd and PicoQuant open up a show-room for...

The STM32 Step-by-Step guide will make an expert ST Developer out...