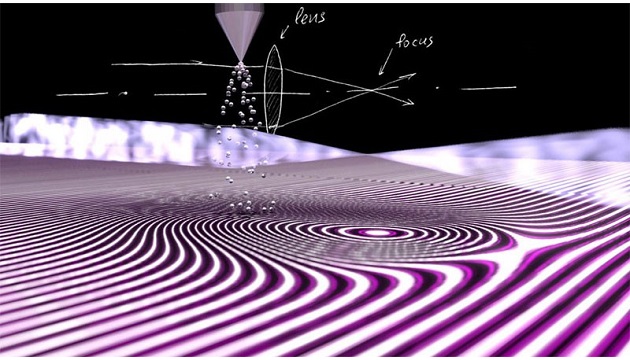 A new refractive lens developed by scientists at the Max Born Institute (MBI) uses a jet of atoms to focus extreme UV (XUV) beams. The atom jet is used in place of glass, which is nontransparent in the XUV spectral region.

In spite of a large number of XUV sources and applications, no XUV lenses have existed until now, said the researchers. The reason is that XUV radiation is strongly absorbed by any solid or liquid material and cannot pass through conventional lenses.

The MBI team formed a lens from a jet of helium atoms. Helium is highly transmissible in the XUB spectral range, and the lens exploits this characteristic. At the same time, the lens allows precise control over the transmission of the helium, the user only needs to adjust the density of the gas in the jet. This feature enables the focal length of the lens to be tuned in order to minimize the spot sizes of the focused XUV beams.

The team further demonstrated that the atomic jet can act as a prism, breaking the XUV radiation into its constituent spectral components. The team compared this phenomenon to a rainbow, only the “colors” of the XUV light are not visible to the human eye.

Compared to curved mirrors, which are currently used to focus XUV radiation, the gaseous refractive lenses provide several advantages. The gas lens is constantly being regenerated through the flow of atoms in the jet, so it does not incur any damage. With the gas lens, there is virtually no loss of XUV radiation compared to a typical mirror, the researchers said. “This is a major improvement, because the generation of XUV beams is complex and often very expensive,” said researcher Bernd Schuette.

XUV beams enable the generation of the shortest human-made light pulses with attosecond durations and are widely used in semiconductor lithography and in fundamental research to understand and control the structure and dynamics of matter. The development of the gas-phase lenses and prisms in the XUV region will make it possible to transfer optical techniques that are based on refraction, and that are widely used in the visible and IR portions of the electromagnetic spectrum, to the XUV domain. Gas lenses could, for example, be used to develop an XUV microscope or to focus XUV beams to nanometer spot sizes, allowing scientists to observe structural changes of biomolecules on the shortest timescales.