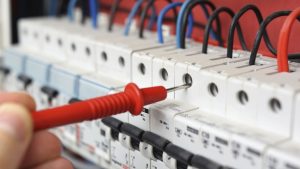 The electrical and industrial electronics industry has witnessed a record double-digit growth of 12.8% in 2017-18. Although higher imports still plague the industry, policy changes and various initiatives undertaken by the Government and industry are eventually showing signs of revival for the sector. The data is compiled by the Indian Electrical and Electronics Manufacturers’ Association (IEEMA), the apex Indian industry association of manufacturers of electrical, industrial electronics and allied equipment. The production and sales data is collected from its member organisations, which represent 90 percent of the entire sector.

Mr Shreegopal Kabra, President, IEEMA said, “A substantial improvement in growth was experienced in the 3rd and 4th quarter of 2017-18 which resulted in a sharp rise in the performance. During this period, the industry grew by 25% in Q3 and 14% in Q4. The astonishing growth of 12.8% is propelled by growth in segments like rotating machines by 12%, HT Motors 18%, cables 20% and Meters 28%”.

The government is procuring smart and prepaid meters to be deployed across the country. It has urged electricity meter manufacturers to scale up production in India, as it plans to shift all connections to smart prepaid meters over the next three years. Energy Efficiency Services Limited (EESL) has floated two global tenders for procuring a total of 10 million smart meters.”

“Growth is also seen in transmission mission line towers due to increase in demand in the domestic market. The Installed Generation Capacity as on 31st March 2018 is 3,44,002 MW.  Almost all sectors are in green after 2 years of dull period; mainly due to domestic demand. The high growth in Q3 & Q4 is also due to stabilized GST,” he further added.

The industry’s record performance is attributed to Government’s schemes like DDUJGY, IPDS and Saubhagya where the country is racing to provide electricity to households in the villages. The government unveiled Rs 16,320 crore Pradhan Mantri Sahaj Bijli Har Ghar Yojana (SAUBHAGYA) in September to provide electricity connection to around 4 crore families in rural and urban areas by December 2018.  Joining hands with government for this cause, IEEMA alongwith REC has created a North East Cell to give impetus to this growth by emphasizing on distribution in North East.

With reforms like Make in India and Ease of doing business, India has jumped a record 30 places to the 100th spot in the World Bank Doing Business rankings and aims to be in the top 50. Thus to achieve the target the present Government has been showcasing the spectrum of measures focusing on rural and infrastructure sectors.

Mr Sunil Misra, Director General, IEEMA reacting on the industry growth articulated, “We believe that this growth momentum will be sustained since major chunk of transmission and distribution projects are likely to be ordered in next fiscal. However, most of the orders would be through EPC route with more new players entering the business and sub-contracting the same to existing contractors. The sectors seem to be reviving from the dark days. Talking about the renewable sector, the Solar Capacity has increased rapidly in last three years from around 2.6 GW to 22 GW. The government is taking proactive steps to achieve the RE generation targets. However, there are still concern areas which have led to decline in growth of Conductors and Insulators.”

At the same time while the growth was there in all the sectors, there was a surge in raw material price in major metals and insulating materials. This has affected adversely the cash flow of the manufacturers thereby affecting the delivery.

Robust and High-density electronics could be enabled by Graphene