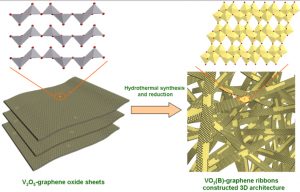 Ajayan Group researchers at Rice University, Houston, Texas has recently stated that graphene-coated ribbons of vanadium oxide could be the best electrode for lithium-ion batteries yet tested. Hybrid ribbons of vanadium oxide (VO2) and graphene may accelerate the development of high-power lithium-ion batteries suitable for electric cars and other demanding applications.

The Rice University lab of materials scientist Pulickel Ajayan determined that the well-studied material is a superior cathode for batteries that could supply both high energy density and significant power density. The research appears in the American Chemical Society journal Nano Letters.

The ribbons created at Rice are thousands of times thinner than a sheet of paper, yet have potential that far outweighs current materials for their ability to charge and discharge very quickly. Cathodes built into half-cells for testing at Rice fully charged and discharged in 20 seconds and retained more than 90 percent of their initial capacity after more than 1,000 cycles.

“This is the direction battery research is going, not only for something with high energy density but also high power density,” Ajayan said. “It’s somewhere between a battery and a supercapacitor.”

The ribbons also have the advantage of using relatively abundant and cheap materials. “This is done through a very simple hydrothermal process, and I think it would be easily scalable to large quantities,” added Ajayan. “Vanadium oxide has long been considered a material with great potential, and in fact vanadium pentoxide has been used in lithium-ion batteries for its special structure and high capacity. But oxides are slow to charge and discharge, due to their low electrical conductivity. The high-conductivity graphene lattice that is literally baked in solves that problem nicely, he said, by serving as a speedy conduit for electrons and channels for ions.”

The atom-thin graphene sheets bound to the crystals take up very little bulk. In the best samples made at Rice, fully 84 percent of the cathode’s weight was the lithium-slurping VO2, which held 204 milliamp hours of energy per gram. The researchers, led by Rice graduate student Yongji Gong and lead author Shubin Yang, said they believe that to be among the best overall performance ever seen for lithium-ion battery electrodes.

“One challenge to production was controlling the conditions for the co-synthesis of VO2 ribbons with graphene,” Yang said. The process involved suspending graphene oxide nanosheets with powdered vanadium pentoxide (layered vanadium oxide, with two atoms of vanadium and five of oxygen) in water and heating it in an autoclave for hours. The vanadium pentoxide was completely reduced to VO2, which crystallized into ribbons, while the graphene oxide was reduced to graphene. The ribbons, with a web-like coating of graphene, were only about 10 nanometers thick, up to 600 nanometers wide and tens of micrometers in length. These ribbons were the building blocks of the three-dimensional architecture. This unique structure was favorable for the ultrafast diffusion of both lithium ions and electrons during charge and discharge processes. It was the key to the achievement of excellent electrochemical performance.”

In testing the new material, Yang and Gong found its capacity for lithium storage remained stable after 200 cycles even at high temperatures (167 degrees Fahrenheit) at which other cathodes commonly decay, even at low charge-discharge rates. 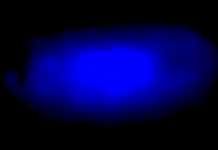 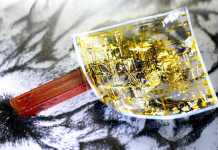 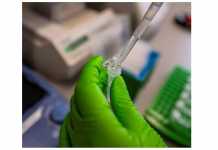