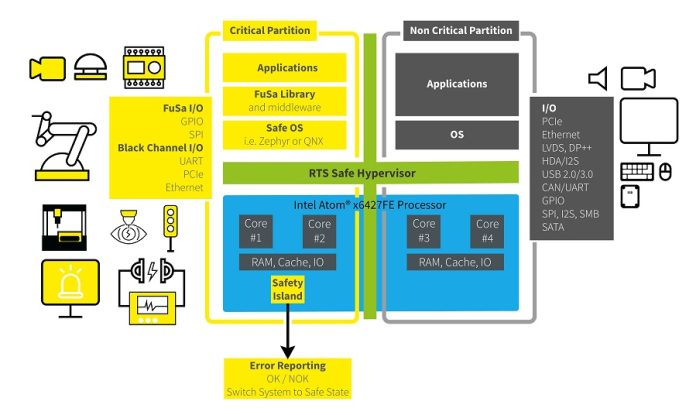 At embedded world Hall 5/Booth 135, congatec announced that it is making massive investments in functional safety (FuSa). Functionally safe embedded computing platforms are needed in many new applications ranging from industrial machinery and collaborative robotics to autonomous vehicles on shopfloors, rails, and roads. For all of these applications, there is also a trend towards hardware consolidation that leads to the need to operate mixed-critical applications on functionally safe multicore embedded systems to manage multiple safety and non-safety critical tasks in parallel. Embedded x86 multicore platforms deliver a solid basis for such applications, which is why congatec now qualifies them for certification with FuSa standards including IEC 61508 and ISO 13849.

“Functionally safe hardware and hardware near software are fundamental building blocks for any functional safety application and require a detailed look at all components. OEMs who utilize a Computer-on-Module as an application-ready building block – including relevant software components such as bootloader, hypervisor and BSP – that are already certifiable for functional safety can save a lot of time and money. They will then only need to qualify the customer-specific carrier board and related adaptations for certification,” explains congatec CTO Konrad Garhammer, summing up the customer value of the company’s functional safety investments. An example of these FuSa building blocks is being presented in a live demo at embedded world.

The functional safety prepared COM Express Mini module conga-MA7 is running a FuSa demo application on the basis of the RTS hypervisor and integrated real-time Linux with the FuSa qualified Intel CPU x6427FE including Safety Island support. This FuSa demo is impressive proof that congatec has already gone a long way to qualify its first Computer-on-Modules based on Intel Atom x6000 E processor technology (formerly codenamed Elkhart Lake), with further modules to follow. OEMs can immediately start implementing congatec’s functional safety-ready modules, BSPs and own software components into their application platforms, and congatec is ready to support OEM customers with all customization needs compliant to their specific certification demands – be it component selection and implementation on carrier boards, OS and hypervisor support, or I/O driver implementation support in accordance with the certification needs.

To qualify Computer-on-Modules for safe operation, all components, as well as the entire BSP, need to be prepared for FuSa certification, including safety manuals and further required documentation. Also, all organizational processes and documents created during development and testing – such as FMEDA (Failure Modes, Effects and Diagnostic Analysis) as well as the verification and validation (V&V) process – need to be brought in line with the certification requirements and audited by external assessors. All this is available from congatec now so that customers can start their FuSa projects immediately at a faster time to market, lower cost and less implementation risk.