CyberEye brings ‘The Things Conference’ for the first time to India 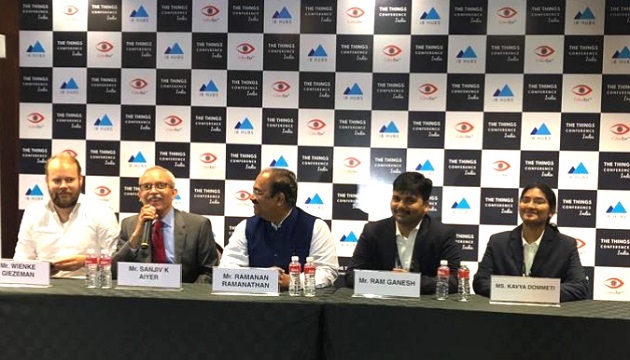 ‘The Things Conference India’, happening for the first time in India, has kick-started at HICC, Hyderabad. The 2 day conference happening on 9th-10th of November witnessed global technology leaders, governments, technology experts, academia, research organizations and industrialists who came together to discuss the immense possibilities with IoT & LoRaWAN.

These technologies can drive India towards building Smart Cities in a cost-efficient and effective way. The event is presented by CyberEye, a technology company with a vision to build a smart and secure world. CyberEye is supported end-to-end by iB Hubs.

Speaking about the conference, the CEO of CyberEye, Ram Ganesh said “Many countries across the world have recognized the potential of LoRaWAN and are implementing the technology to build Smart Nations. The changes it could bring in India are immense. LoRaWAN can reduce the costs involved in building Smart Cities multifold. With this technology, a Smart India is not very far.”

Smart and connected cities will bring substantial improvements in the urban way of life that would effect ⅓ of the Indian population. Smart cities also affect the core infrastructure elements like solid waste and energy management, efficient urban mobility and public transport. This will give way to a robust and sustainable e-governance.

Mr. Ravi Shankar Prasad, Minister for Electronics and Information Technology, and Law & Justice, Govt. of India, also sent his wishes to The Things Conference, over a video message

Over 300 delegates from across the world including industry leaders in Governments, IoT, developers, corporates, governments, thought leaders, & academia have come together to discuss the immense possibilities and overcome the challenges in building smart applications at scale.