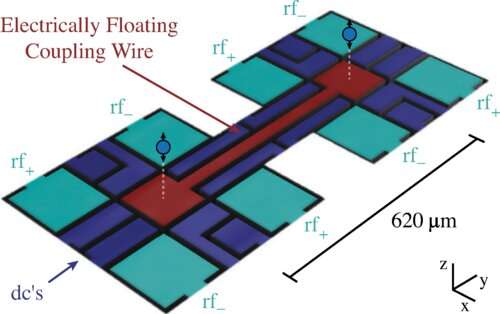 Two teams of researchers working independently have succeeded in coupling remotely located ions using a wire conductor. Both teams showed that individual particles can sense one another through the mirrored charges they generate—in this case, through a metal wire. In the first effort, a team at the University of California at Berkeley connected two ions over a small span and slowed the cooling in one by cooling the other. In the second effort, an international team of researchers successfully cooled a second ion by cooling the first and applying a resonator to the wire.

Cooling trapped charged particles have become a major part of modern physics, from quantum research to conducting precise metrology. More recently, physicists have begun conducting experiments that involve sympathetic cooling, which typically involves Coulomb interactions between particles at very close distances. And while such experiments have proven fruitful, physicists would like to be able to conduct similar experiments with particles that are farther apart. In these two new efforts, both teams have shown that a wire conductor can be used to accomplish that goal using an approach that is similar in some respects to the old tin-can telephone made by children. Both were designed around the fact that when left alone, ions tend to grow warmer due to their interactions with the environment.

The work by the first team involved trapping two calcium ions at a distance of 0.6 mm away from one another. The two traps were made by etching electrodes onto a planar wafer. The researchers then connected a tiny wire between the two and cooled one of them while measuring the heat of the second. They found that cooling the first ion slowed the rate of increase in heating of the second. The sympathetic cooling of the first had been conducted over the wire.

The work by the second team was similar to the first. They laser-cooled one of a pair of beryllium ions set 9 cm apart and then measured any changes to the second. But they also added a resonator which increased the sympathetic cooling distance and strength. The result was the cooling of the second ion.