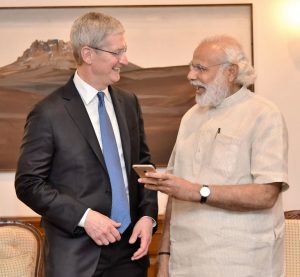 The iPhone maker company is in dialogue with the Indian government on the prospects of manufacturing its products in India.

Apple has reportedly sent a letter to the government last month in which it charted its assembling plan for the products in India and sought financial incentives from the government.

Assembling iPhones in India is crucial for Apple if the company wants to make its products available to the Indian market at lower price. The Indian government currently imposes heavy taxes on electronic products like smartphones imported to India to encourage local production.

“Make in India” is one of the flagship initiatives undertaken by the Indian government since Narendra Modi became the prime minister in 2014. The initiative encourages and incentivizes companies to assemble products in India by giving tax breaks and other benefits to companies. iPhone, not manufacturing locally and with a throbbing market in India, also has the highest prices here in compared to the rest of the world, .

Conversation about Apple showing inclination to manufacture its products and also setting up its own flagship stores have been doing rounds for a year, preceding Tim Cook’s India visit and his meeting with Prime Minister Narendra Modi in May this year. Apple’s intentions grew stronger in June after the Indian government announced it is relaxing the norms around single-brand retail stores for foreign entities, paving the way for Apple to launch its stores in India.

It’s isn’t as if Apple hasn’t explored other avenues to make its iPhones available at a lower price in India. Earlier this year, Apple sought the government’s permission to sell refurbished iPhones in India. The Indian government, however, rejected the proposal, saying refurbished and old electronic products significantly add up to electronic waste.

Much of Apple’s products are manufactured in China by Foxconn. Incidentally, Foxconn has factories in India and it already assembles smartphones for many brands, including Nokia, Xiaomi, InFocus and others.

Apple assembling iPhones in India would help the company price its products more competitively in the country. However, it remains to be seen whether Apple manufactures the latest iPhones (when the manufacturing begins, that is) or focuses on more affordable and hence popular older models. The Apple iPhone 5s, for instance, has been Apple’s highest selling iPhone model in India for a long time and retails at under $400.