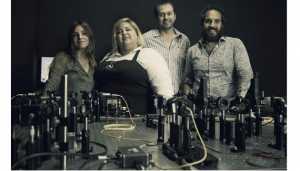 A research team at Università degli Studi Roma Tre has shown that quantum light can be used to track enzyme reactions in real time. The researchers developed a setup that allowed them to control the light at the level of a single photon. This made it possible to use low illumination without disrupting the enzymes, with the potential to achieve improved sensitivity. The capability to address the sample directly allowed dynamic tracking with higher resolution.

The researchers used their new technique to track changes in the chirality of a sucrose solution due to activity of an enzyme known as invertase. Tracking the chirality — the ability of a given molecule to rotate the polarization of light — provides information that can be used to determine how many molecules of sucrose have been processed by the enzymes. Control of the probe at the quantum level demonstrated the potential for reducing invasiveness while optimizing sensitivity at the same time.

“This work is just one example of what quantum sensors could do,” research team leader Ilaria Gianani said. “Quantum sensors could be used to optimally use light for countless applications, including biological imaging, magnetic field sensing, and even detection of gravitational waves.”

The researchers said there are some technological aspects to address before their approach could be applied to the tracking of enzymatic reactions. For example, light losses are a strong limiting factor, but the team hopes that its work will help spur technology development that could address this problem. This preliminary effort, bringing together methods of quantum physics and biology, could be a step toward the full development of quantum sensors for biological systems.