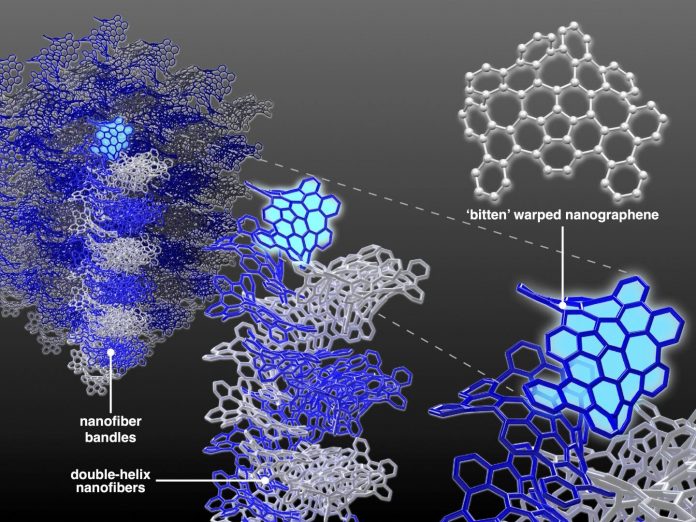 Nanographene is flexible, yet stronger than steel. With unique physical and electronic properties, the material consists of carbon molecules with only one atom thick arranged in a honeycomb shape. Still early in technological development, current fabrication methods require the addition of substituents to obtain a uniform material. Additive-free methods result in flimsy, breakable fibers—until now.

An international team of researchers has developed self-assembling, stable, and strong nanographene wires. The team set out to synthesize curved, infinitely stacking nanographene—like potato chips in a cardboard can—that can assemble into nanowires.

Effectively stacked hydrocarbon wires have the potential to be used as a variety of nano-semiconductor materials. Previously, it has been necessary to introduce substituents that are not related to or inhibit the desired electronic function in order to control the assembly of the wires.

By removing substituents, or additives, from the fabrication process, researchers can develop molecular materials that have a specific, desired electronic function. With this goal in mind, the team developed a molecule called ‘bitten’ warped nanographene (bWNG), with 68 carbon atoms and 28 hydrogen atoms forming a ‘bitten apple’ shape. Created as a solution, when left to evaporate over 24 hours in the presence of hexane—an ingredient in gasoline with six carbon atoms—bWNG becomes a gel.

The researchers attempted to recrystallize the molecules of the original solution to examine the specific structure of the bWNG gel through X-ray crystallography. This technique can reveal the atomic and molecular structure of a crystal by irradiating the structure with X-rays and observing how they diffract.

They attempted recrystallizing many times to determine the structure, but it grew to only a few hundred nanometers, noting that this size is much too small for X-ray crystallography. It was only by electron diffraction, a new method for determining the structure of organic materials, that they were able to analyze the structure.

Electron diffraction is similar to X-ray crystallography, but it uses electrons instead of X-rays, resulting in a pattern of interference with the sample material that indicates the internal structure.

They found that the bWNG gel consisted of double-stranded, double-helix nanofibers that assembled themselves from curved, stackable nanographene.

The structure of the nanofibers is a double-stranded double helix, which is very stable and, therefore, strong. Next, we would like to realize a semiconductor wire made entirely of carbon atoms.