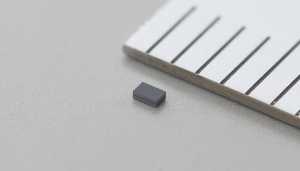 Murata claims to have developed the world’s smallest 32.768kHz MEMS resonator, which is expected to make a significant contribution to reducing the size and power consumption of IoT devices, wearables, and healthcare devices.

The new MEMS resonator is more than 50% smaller than competing solutions, while featuring a low ESR, excellent frequency accuracy, and low power consumption. This is due to the use of MEMS, a technology that was developed by Murata Electronics Oy (formerly VTI Technologies) which has a proven track record of unique and innovative MEMS used in a wide variety of applications originating with the automotive industry.

While achieving miniaturization through MEMS technology, the new MEMS resonator exhibits frequency temperature characteristics of less than 160ppm (Operating temperature: -30 to 85°C ) with an initial frequency accuracy (25°C ) that is comparable to or better than that of a quartz tuning fork crystal resonator.

Key features are as follows:

With crystal resonators in general, the ESR tends to rise as the device becomes smaller in size. However, with a low ESR (75kΩ) the MEMS resonator can generate a stable reference clock signal by reducing the IC gain while also cutting power consumption by 13% compared to a conventional quartz crystal. (Based on internal tests)

Can be built into an IC package

With silicon-based wafer-level chip scale packaging (WLCSP), the resonator can be co-packaged with an IC, eliminating the need for any external low-frequency clock references.

Mass production of the new resonator is scheduled to begin in December 2018 as the WMRAG Series.

The new resonator will be showcased at the Murata booth at CEATEC JAPAN 2018, which will be held at Makuhari Messe from October 16 to 19, 2018.