“We have a lot of smart people running the electronics industry around the world and a lot of smart engineers inventing the future. I think I have to leave that in their hands.” Glenn Smith 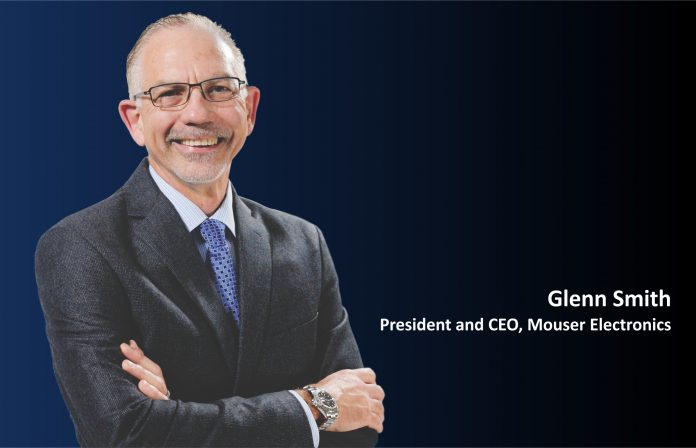 Glenn Smith, President and CEO, sits at the helm of Mouser Electronics, a fast growing industry leader in the successful portfolio of Berkshire Hathaway companies. His tenure has seen Mouser grow from a small catalog distributor to become one of the world’s largest electronic components distributors. Throughout his 42 years at Mouser, he has held management positions in all areas of the company including Technical Sales, Marketing, Purchasing, Operations and IT.
Glenn Smith’s remarkable understanding of subjects, a larger view on global economy, his eye on latest technology and future needs of people, his philanthropic heart and his finger on the pulse of global business and making decisions on the Go distinguishes him standing taller than the peers. In conversation with ELE Times, he spoke on a number of very thought provoking subjects that are grappling the world currently. Excerpts.

ELE Times: You have seen the company evolving for decades. To what do you attribute the company’s growth over the years?
Glenn Smith: We started with just a handful of employees and now have over 1,600 and 21 locations worldwide. Our strategy has evolved as the market needs have changed. The success of the Internet has played a key role in our global growth. What we haven’t changed is our commitment to the customer and our ability to be the fastest distributor in the world at delivering the newest technologies globally. We have had to use a lot of new technology ourselves to maintain that leadership. Our order processing systems are extremely advanced.

ELE Times: You have closely observed the evolution of the global electronics industry. How do you narrate the story of electronics components distribution in USA and rest of the world?
Glenn Smith: When I started at Mouser in 1973 we were still stocking radio tubes. Back in those days the customer was looking for in stock inventory, just like they are today. In 1983, Mouser became the first distributor in the USA who offered “No Minimum Order” and “Same-Day Shipping”. That was a game changer. That really propelled Mouser forward and eventually forced us to invest in technology to either scale or fail. Also back in the day, customers were not as concerned about quality and counterfeiting was not considered a problem in the electronics industry. All that has changed. Authorized distribution is today the only way to ensure that you have non-counterfeit components for production and for your new design. But it’s not just the fact that authorized distributors like Mouser provide genuine authorized components obtained directly from the manufacturer. But also important are standards for storage conditions, product handling and product lifecycle management that we are required to meet.

ELE Times: Mouser has gone a long way to reach its position in the top global electronics component distributor list. What are your plans to further climb the ladder?
Glenn Smith: Yes, we’ve come a long way. It’s taken a lot of hard work, strategic vision and dedicated employees to reach this point. Our mission still holds true: to be the source most preferred by engineers and buyers for semiconductors and electronic components. The keys to our past success as well as our future success can be described in one word: Service. We cater to our customers. They know they can depend on us to deliver the newest genuine parts on time and every time. This is our model and our strategy and we are committed to it. I am committed to continue with the policy – that is the key to climbing the ladder.

ELE Times: As chairman and CEO of Berkshire Hathaway Warren Buffett, a legendary businessman and philanthropist, must cast the shadow of his persona over the philosophy of Mouser. As part of Berkshire Hathaway, how do you see the future of Mouser in the time to come?
Glenn Smith: We’ve thrived being part of Berkshire Hathaway. The success of Berkshire is the fact that while Warren has 100 direct reports, he doesn’t try to run any of the businesses. Instead he gives us a couple of key principles to follow. The most important one is that your reputation is the most important thing. More important than making a profit. Warren says that his running hands off, only works when you buy great companies that have great people running them. We are really proud that he selected Mouser as meeting those requirements. As for the future, Mouser is going to continue to grow globally and because of Berkshire, we won’t have any problem re-investing to maintain our inventory and technology position.

ELE Times: What would be the “next big thing” that might spur growth in the electronics industry? Can you point out the emerging markets or technologies that look promising to you?
Glenn Smith: Hard to pick one thing. Because of our focus on introducing the Newest Products and Technologies to the market, we see a lot of big things coming. But I don’t think it is just one thing. There are also a lot of technologies that are being combined in new ways. IOT, sensors, processors, cloud, wearables, NFC, wireless, batteries, lighting, medical and industrial automation are all going to continue to affect us all and drive the future of our industry.

ELE Times: The fast pace of Research and Development is changing the face of business, particularly in the electronics industry. Do you think the next phase of development, say for ten years, would be like a fairy tales?
Glenn Smith: Indeed, technology is advancing faster than ever before. We will likely see driverless cars and other space-age devices that were previously only imagined in movies and books. Our view is that local, new design work will continue to grow worldwide. But with the number of engineers in India and throughout Asia growing at a much faster rate than in the U.S. and Europe, it’s likely a matter of time before Asia becomes the largest demand creation marketplace. We continue to grow our model worldwide, both in terms of translated product content as well as the ability for customers to do business with us anywhere, in any language, and in any currency. We try to make it as easy as possible, giving customers a great buying experience for the newest components.

ELE Times: What would be the needs of the world 10 years from now?
Glenn Smith: The one constant is change. Climate change, clean water, population growth, world health problems, energy, political conflicts and financial upheavals are problems that are not going to go away. These are problems that have existed for as long as I have been around, and they will be there in 10 years. Our industry does and will have big impact the solutions to these problems. But it takes someone smarter than me to figure out the future. Warren Buffett usually answers a question like this by saying, “I don’t have a Crystal Ball.” I don’t either. But we have a lot of smart people running the electronics industry around the world and a lot of smart engineers inventing the future. I think I have to leave that in their hands.

ELE Times: As Mouser enjoys a global reputation, what are the greatest challenges the company faces in serving a worldwide customer base?
Glenn Smith: The challenges are what they have always been: language, currency, and regulation. As part of our customer service approach, we made it a priority to serve our customers locally – in local language, currency and time zone through our branch offices positioned strategically across the globe. This “global” approach has worked well for us and differentiates us in the market. Short term, slow global growth in the next few quarters is a challenge for everyone. The Chinese economy and the Euro have caused some bumps in the road. US electronics production has also slowed to single digits. Major growth, however, is expected to continue in India and Asia., but overall we are very optimistic.

ELE Times: How important is the Indian market for Mouser, looking at the fact that Indian government’s initiative has attracted the world’s attention as the next big manufacturing hub. How do you comply to the changing scenario?
Glenn Smith: The Indian market is huge in every respect. India is now 10th in the world in factory output, and as of 2015, India along with a few others have graduated to the next stage. India is no longer considered developing by the International Monetary Fund, but is a newly industrialized country. India also is among the largest producers of engineers in the world, and as such Mouser is committed to a strong and growing presence in India. Our Branch in India continues to expand to address the needs for the newest products as well as production components for our customers throughout India. Manufacturing is important, but we will also remain focused on the needs of the Indian design engineer.