The Rise of the Machines: Industrial Robots ‘Favouring’ the Automation 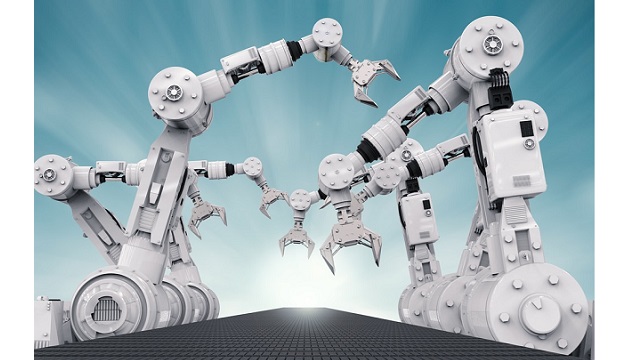 A “robot revolution” will transform the global economy over the next 20 years, cutting the costs of doing business but exacerbating social inequality, as machines take over everything from caring for the elderly to flipping burgers. Robotics is everywhere: be it Industry, Infrastructures, Healthcare, Retail, Education, Security, Agriculture or Tourism.

It has been a decade since the inception of the Industry 4.0. Advanced robotics systems are ready to transform industrial operations. Compared with conventional robots, advanced robots have superior perception, adaptability, integrability, and mobility. These improvements permit faster setup, commissioning, and reconfiguration, as well as more efficient and stable operations. Taken together, these improvements mean that advanced robots will be able to perform many tasks more economically than the previous generation of automated systems.

The hullabaloo of Industrial automation has established a great shape and is already streamlining the manufacturing process, as the industrial robots are consistently used for assembling products, spray painting, cutting and polishing, inspection of products, handling dangerous materials, and what not.

In this piece, ELE Times has portrayed today’s unprecedented trends and technologies in the robotics technology for the industrial automation.

The fourth industry revolution is at a win with the emergence of intelligent industrial robotics on factory floors. Although, the robots have been used by the manufacturers for quite a long time. The constant development of robotic technologies has undoubtedly broadened potential applications for smart industrial robots. Robotics experts are working day in and day out to leverage the industrial automation with all dimensions. Here, we have a list of some of the latest industrial robots and their applications:

ABB’s IRB 1100 is its smallest, lightest robot to date and is part of its growing offering of solutions for small parts assembly. The robot is designed to meet the unique challenges of semiconductor, pharmaceutical and electronics manufacturers, who need to handle small and often delicate parts while working at speed and maintaining both high productivity and quality.

The IRB 1100 offers up to 35 per cent faster cycle times to maximize productivity, and best-in-class repeatable accuracy. Powered by ABB’s new OmniCore controller, the IRB 1100 is equipped with advanced motion control capabilities, making it ideal for supporting rapid assembly, pick and place and material handling applications.

Flexibility is another important consideration for small parts assembly, as manufacturers need to increasingly accommodate smaller lots of greater variety in much shorter product cycles. The IRB 1100 has a ten per cent smaller footprint and is 20 percent lighter. It has a slim body compared to previous robot generations, so it can be flexibly deployed in confined spaces and into existing automation lines.

The MiR1000 is designed to do just that with a payload of 1000kg. The robot requires cutting-edge technologies to make this heavy duty lifting possible.

The robot requires six laser scanners, 3D cameras, and an artificial intelligent camera to be exact. The scanners are strategically positioned to gather sensory data under, over, outward and above the mobile robot, providing 360 degree coverage of the environmental landscape that it needs to navigate through. The scanners also provide a safety field surround the robot, just in case something or someone takes a wrong step, the robot stops instantly. The 3D cameras look out and above two meters in the air, to ensure the pathway is clear. An optional AI camera identifies objects and uses machine learning to make real-time decisions on the action to take.

Just like the Honeywell AMR, the applications of MiR robots are varied and flexible. A software program controls a single robot via app allowing users to change the route of the robot in a couple of minutes and program a completely different task. A fleet controller software program connects all of the MiR robots in a traffic control interface to make sure they work together or at the very least, around each other.

A new robotic technology has been developed by Honeywell Intelligrated for unloading trucks, trailers and shipping containers at general merchandise or parcel distribution centers. The fully automated unloader significantly reduces the manual effort required to operate the receiving dock, without a need of an operator.

This helps warehouses and fulfillment centers improve workplace safety, reduce staffing challenges and minimize damage to packages. The robotic unloader is designed to work within existing fleets, eliminating the need for special configurations or modifications. The robotic unloader uses a straddle arm to perform picking activities and set packages onto an articulated nose conveyor.

RND, a Platinum level Epson AutomateElite System Integrator partner, incorporates the Epson SCARA and 6-Axis robots with rotary and linear indexers and machine vision for its Hydraulic Valve Assembly Machine, a turnkey solution for the most demanding assembly operations. RND chose the Epson T3 All-in-One SCARA robot for its fast installation, low cost and all-in-one design, with a built-in controller, perfect for simple pick and place operations, and the G3 SCARA robot for its increased speeds and inertial loads for the more demanding stations. The Epson C8 6-Axis robot was also selected for its SlimLine design perfect for applications with limited workspace. With a compact wrist for efficient motion in tight spaces and a compact elbow for optimum workcell layout, the Epson C8 6-axis robot has a wide range of motion, so parts can be accessed from virtually any angle.

The Hydraulic Valve Assembly Machine is based on RND’s Modular Assembly Platform (MAP), which utilizes a linear motor puck technology to move the parts from station to station. With the modular design, each station can carry out a new component assembly or inspection.  The Epson T3, G3 and C8 robots pick parts ranging from nuts, housings, and springs, to adjustment screws and hex bodies, assembling them into the awaiting pucks. A leak test is performed at the final station and finished valves are exited from the machine.

The new TS2 SCARA is a completely redesigned four-axis machine that offers incredible flexibility for the production line and features a fully encapsulated design, compact footprint and ultra-short cycle times with a high degree of repeatability. The robots also can be modified for sensitive environments to deliver hygienic and safe solutions for the food, medical and pharmaceutical markets.

Also making its North American debut is Stäubli’s HelMo mobile robot system, which is capable of navigating with complete autonomy by continuously monitoring its environment with three integrated laser scanners. This automated guided vehicle (AGV) features a Stäubli six-axis TX2-90L collaborative robot, which allows HelMo to work alongside employees at any stage of the process. Stäubli Electrical Connectors, one of the world’s leading manufacturers of electrical connectors, has been using HelMo in its own factory production to handle spikes in demand and to offset unforeseen absences among its human workforce.

India is one of the strongest growing economies among the Asian emerging markets. Indian industry is rapidly moving towards automation for increasing production volume, accuracy, and safety. To build up the industrial automation for increasing the product supply and domestic manufacturing. Indian Industrial Robotics market was evaluated at 4,564 units in 2018 and is estimated to grow at 13.3% CAGR from 2019-2024.

Though India started late, the use of industrial robotics in India is soaring with due time. In fact, according to the International Federation of Robotics, India now ranks third in the world in implementing industrial robotics for its core business processes. India’s contribution to the world of robotics can be highlighted with the introduction of the humanoid ‘Mitra’ to the world. Mitra includes a range of artificial intelligence features, such as face recognition, conversation and autonomous navigation, which make it all the more incredible.

The call for precision machining, along with high production rates, has made automation and instrumentation an indispensable aspect of manufacturing units. Almost all the processes in the production and processing plants have been automated in the past decade. This has also complemented the expansion of industrial robots integration into industrial operations.

India is analyzed to renew the process automation market owing to the escalated demands from the general manufacturing, food and beverage, and pharmaceutical verticals. Since the industrial operations are becoming complex amidst rapid technological advancements, the growth of the industrial robot is expected among such environment that is beyond the capacity of manual involvement.

Three years ago, TAL Manufacturing Solutions Ltd, a unit of Tata Motors Ltd, showcased a robot called BRABO at the “Make in India” week in Mumbai. Short for “Bravo Robot”, BRABO was touted by the company as the first “Made in India” industrial robot, and is designed to lift loads of up to 10 kilograms.

Mahindra and Mahindra Ltd already has a “robotic weld line” at its factory in Nashik, which now caters to many of its products including the Marazzo and the XUV300. Tata Motors too uses robots in its Pune factory while Godrej and Welspun run their shop floors with the help of an Intelligent Plant Framework, which enables tracking of machinery and productivity on the floor in real time.

Maruti Suzuki India Ltd has numerous robots employed at its Manesar and Gurugram car factories, with more than 2,000 robots working at the weld shop in its Manesar facility alone. Manjushree Technopack Ltd’s Bidadi (in Bengaluru) manufacturing plant also has more than a dozen of its packaging machines connected to a network, providing monthly updates on maintenance issues.

The current focus of the industry tends to be on giving robots vision. Specifically, the rise of machine vision technology. This, combined with the advancement of the Internet of Things (IoT), gives machines the ability to process images and understand what they are “seeing.”

As this technology continues to proliferate, the next step is giving robots the ability to apply these things to learn on their own. For example, a robot can currently be programmed to pick up and place items, but in the future, it will combine machine vision with machine learning to figure out its own programming through trial and error.

Another major trend that will continue into the future, are collaborative robots. This reflects the focus of the industry towards creating robots that are simpler, easier to program, and able to integrate into current processes.

To make these robots safe, there’s a large market for safety sensors that ensure humans can work alongside the robots without any significant risks. Machine vision will contribute to this as well, offering robots the ability to “see” when someone is in their workspace.

All of these things contribute to robots that can be placed anywhere on the manufacturing floor. The future will continue to enhance technology like 3D embedded vision, multispectral, and hyperspectral imaging. This, combined with artificial intelligence and deep learning, will empower industrial robots to improve themselves and keep pace with the human workers around them.

The industrial robot industry is expected to grow 175% over the next nine years, which will result in more competition and innovation, which will drive these modern technologies forward. Collaborative robots will continue to become safer and their costs will go down as the industry expands and offers more options.

While robots are largely involved in automotive manufacturing, as they become smaller and more accurate, it’s predicted that robots will also enter the electronics manufacturing sector to assist with building complex things like smartphones or microchips.

By 2025, it’s expected that the demand for electronics manufacturing robots will match the automotive industry. We’re already seeing growth across all robotics industries.