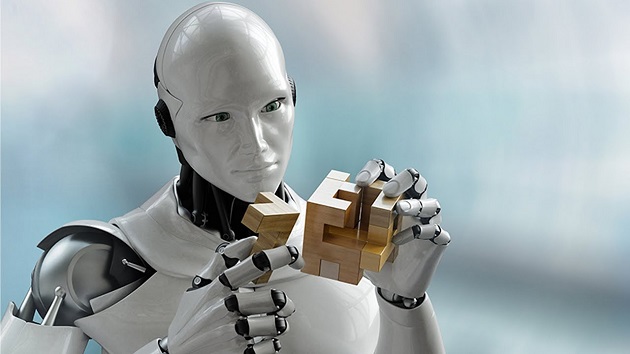 In today’s global manufacturing sector, there are a few main ways in which AI is deployed along with robotics. AI is a highly useful tool in robotic assembly applications. When combined with advanced vision systems, AI can help with real-time course correction, which is particularly useful in complex manufacturing sectors like aerospace. AI can also be used to help a robot learn on its own which paths are best for certain processes while it’s in operation.

Robots are machines or mechanical human beings that are designed to assist humans with laborious and complex tasks. However, such robots are no more just mechanical design rather they have become smarter with time and advancement of technologies. AI developments have induced evolution and better capacity in robots. Even robotics and AI together can revolutionize almost any industry for the greater good.

Using AI’s subset Machine Learning (ML), if we design a system where the device learns from its mistakes and automatically compensates for errors as it works, then we’ve successfully combined AI and robotics. The combination of these technologies has the potential to make people’s lives a lot easier. People can monitor the performance of robots as opposed to manually performing tasks themselves. The downside of these systems would be that the labour demand for any industry that utilizes these robots will be far less. The robots will correct themselves if any errors arise, and only massive, glaring problems would need a human to address them.

Well, some of them have already arrived in the market. In CES 2020, Samsung unveiled a bot chef who is capable of making people a salad on their command. Also, Delta Airlines showcased an exoskeleton that can boost the strength and endurance of the human body. We can observe that robotics offers a lot of promise from the creation of artificial limbs to entire suits that can help people performs difficult tasks so much easier. Amid this, the amalgamation of AI and robotics introduces interesting interplays. The industry can be benefitted from earnest promises of AI + Robots.

While businesses through increased demand to drive down prices will eventually make these machines affordable, for the time being (and for quite a while into the future), the application of AI and robotics as a combined unit remains too expensive to apply to routine tasks. As development in the field moves forward, we may see robots that work on machine learning within the next decade. The question of whether humanity is ready for the impact it will make both socially and economically is something that experts are still debating today.

Moreover, robotics packaging uses forms of AI frequently for quicker, lower cost and more accurate packaging. AI helps save certain motions a robotic system makes, while constantly refining them, which makes installing and moving robotic systems easy enough for anybody to do.

Furthermore, robots are now being used in a customer service capacity in retail stores and hotels around the world. Most of these robots leverage AI’s natural language processing abilities to interact with customers in a more human way. Often, the more these systems can interact with humans, the more they learn.

A handful of robotic systems are now being sold as open-source systems with AI capability. This way, users can teach their robots to do custom tasks based on their specific applications, such as small-scale agriculture. The convergence of open source robotics and AI could be a huge trend in the future of AI robots.

When working together, robots are smarter, more accurate and more profitable. AI has yet to come close to reaching its full potential, but as it advances, so will robotics.