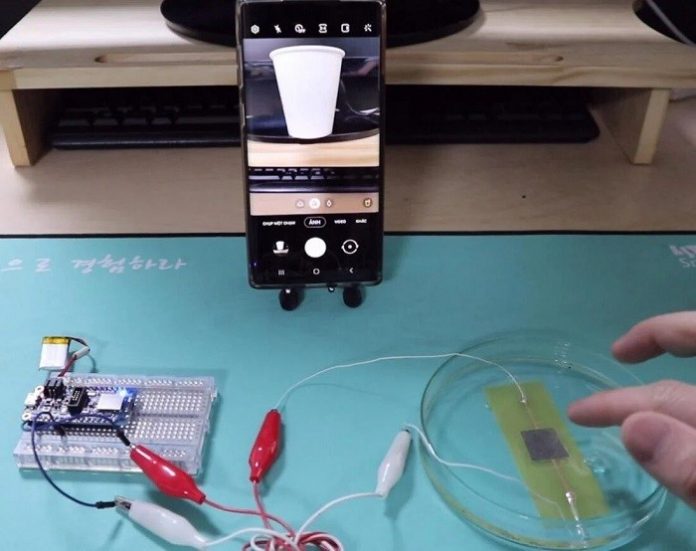 Flexible and waterproof sensors that could unlock new applications for wearable electronics have been developed by scientists in Korea. The study shows how the pressure sensor can control a phone, to take photos and play music, even when the sensor is fully immersed in water.

The technology could transform the use of wearable electronics in healthcare, smart textiles and for specific applications including scuba diving equipment, say the study researchers, who are based at Soongsil University in Seoul.

“Flexible electronics will usher in a whole new world of wearable technologies to monitor our health and lifestyles,” says Jooyong Kim, a materials scientist who led the research. “But until now, many of these applications have been held back because the pressure sensors they rely on could not handle being exposed to water. We have changed that.”

To demonstrate the power of the new technology, the researchers incorporated one of the sensors into a flexible face mask. Sensitive enough to detect the movement of air inside the mask, the sensor could track and report the rate of breathing of a wearer in real-time.

The sensor converts tiny movements caused by change in pressure and electrical resistance into electronic signals. Like many similar flexible electronic devices, the design of the circuit was hand-drawn onto a conducting material with a marker-pen, which acts to shield the circuitry when the rest of the material was etched away. This is cheaper than traditional methods.

The researchers then mounted the finger-print sized circuit onto a blend of wet tissue paper and carbon nanotubes, which works to detect changes in pressure. They then covered the layered sensor device with a strip of tape, to make it waterproof.

The device can track both the magnitude and location of pressure applied to it. Using machine learning technology to process the signals, the researchers found the sensors could feel and report applied pressures in the lab with up to 94% accuracy. And by connecting the sensor to a wi-fi network, the researchers could press it underwater to control phone functions, including double touch, triple touch, short touch, and long touch patterns.

“We expect the readily- available materials, easy fabrication techniques, and machine learning algorithms we have demonstrated in this journal article will bring significant contributions to the development of hand-drawn sensors in the future,” says Kim.