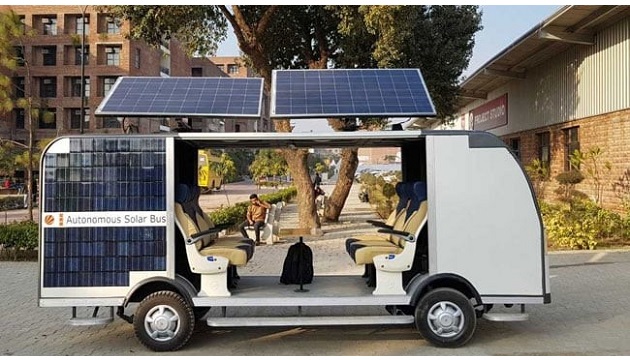 Phagwara based researchers have designed a first of its kind, a 1,500 kg driverless bus, powered by solar energy. Currently, the bus can be used inside closed campuses, however, the on-road version would come later. The bus can run upto 70 km on a single charge. The bus costs Rs 15 lakh.

The bus is charged using solar panels that line the vehicle. They can generate two kilowatts of power and help charge the six lead acid batteries.

“This is a driverless bus and it will run automatically sensing the road and its surroundings. It can cover infinite distances as it is a solar bus and the sun is continuously charging the batteries. Without continuous charge, it can run 70 km in one charge. In 2014, we had developed a driverless golf cart and then some time last year, we thought why not develop a system or a bus which does not depend on petrol, diesel or electricity. This project took a year,” said Mandeep Singh, Project Leader, Autonomous Bus, Lovely Professional University, Phagwara, said.

About 300 students and five faculty members fabricated the bus at a workshop within the university.