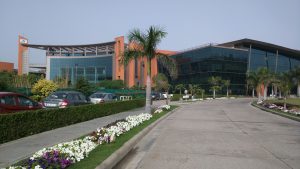 “Sequential growth was driven by the increasing pervasiveness of ST’s products in flagship smartphones, wearables and Internet of Things applications: from MEMS and sensors, including our latest 6-axis gyroscope, to imaging sensors, with new products based on our Time-of-Flight technology, to our expanding STM32 family of microcontrollers. In addition, we grew year-over-year in automotive and we continued to see positive momentum in industrial, the distribution channel and the mass market.

“In the quarter we completed the acquisition of NFC and RFID reader assets, strengthening our portfolio of secure microcontrollers for next-generation mobile and Internet of Things devices, while also improving our cash balance thanks to increased cash flow generated from operations.”

(1) Non-U.S. GAAP measure. See Appendix for reconciliation to U.S. GAAP and additional information explaining why the Company believes these measures are important.

(a)    Net revenues of “Others” includes revenues from sales of Imaging Product Division, Subsystems, assembly services, and other revenue.

Combined R&D and SG&A expenses were $542 million, decreasing by $23 million on a sequential basis, benefiting from favorable seasonality and the set-top box restructuring plan.

Third quarter other income and expenses, net, registered income of $18 million compared to $28 million in the prior quarter mainly due to lower R&D funding.

Impairment and restructuring charges in the third quarter were $29 million compared to $12 million in the prior quarter, both mostly related to the set-top box restructuring plan announced in January 2016.

Third quarter operating income was $90 million compared to $28 million and $91 million in the prior quarter and year-ago quarter. In the third quarter, the Imaging Product Division turned to profit. In addition, the Company continued to make progress on its restructuring of the set-top box business targeting annualized savings of $170 million upon completion. Operating income before impairment and restructuring charges(1) improved sequentially to $119 million, or 6.6% of revenues, from $40 million, mainly due to higher revenues and higher gross profit as well as lower operating expenses. On a year-over-year basis, operating income before impairment and restructuring charges improved by $17 million reflecting improved manufacturing efficiencies, better product mix, lower operating expenses and favorable currency effects, net of hedging, partially offset mainly by a lower level of R&D grants.

In total, net revenues in the nine months 2016 decreased 2.2% to $5.11 billion from $5.23 billion in the year-ago period. Net revenues, excluding businesses undergoing a phase-out, decreased 0.9% with strong growth in specialized image sensors and solid growth in microcontrollers and automotive offset by analog and power discrete, due to weakness in the computer peripheral markets, and MEMS, due to weakness in smartphones earlier in the year.

Gross margin in the nine months 2016 improved to 34.4% from 33.9% in the year-ago period mainly benefiting from manufacturing efficiencies and favorable currency effects, net of hedging, partially offset by price pressure.

Combined R&D and SG&A expenses decreased 3.5% to $1.68 billion compared to $1.74 billion in the year-ago period mainly reflecting lower R&D costs due to favorable currency effects, net of hedging, and the benefits of the set-top box restructuring plan and the saving plan completed in 2015.

Other income and expenses, net, registered income of $73 million compared to $110 million in the year-ago period mainly due to a lower level of R&D grants.

On a year-to-date basis, impairment and restructuring charges were $69 million compared to $61 million in the year-ago period and principally related to the set-top box restructuring plan.

Capital expenditure payments, net of proceeds from sales, were $143 million and $379 million during the third quarter and nine months of 2016, respectively. Nine Month 2015 capital expenditures were $378 million.

After the cash outflow of $78 million for the acquisition of NFC and RFID reader assets, free cash flow(1) was $100 million and $178 million during the third quarter and nine months of 2016, respectively.  Nine months 2015 free cash flow was $179 million.

Total equity, including non-controlling interest, was $4.65 billion at October 1, 2016.

Mr. Bozotti commented, “Demand is currently strong in the smartphone market and we continue to see positive trends in automotive and industrial. In the fourth quarter, we anticipate at the midpoint a sequential increase in net revenues of about 3.2% and a gross margin of about 37.0%.

“Thanks to our strategic focus on Smart Driving and Internet of Things, the increased traction we are seeing with our new products and positive market trends, ST is positioned to achieve year-over-year revenue growth for 2016 driven by automotive, specialized image sensors and microcontrollers.

“In addition, we expect for 2016 to improve our profitability and continue to generate solid free cash flow. While we remain mindful of macroeconomic factors and their potential impact on our customers and the semiconductor market, we see less macro risk than we did earlier in the year.”

This outlook is based on an assumed effective currency exchange rate of approximately $1.11 = €1.00 for the 2016 fourth quarter and includes the impact of existing hedging contracts. The fourth quarter will close on December 31, 2016.

Some of the statements contained in this release that are not historical facts are statements of future expectations and other forward-looking statements (within the meaning of Section 27A of the Securities Act of 1933 or Section 21E of the Securities Exchange Act of 1934, each as amended) that are based on management’s current views and assumptions, and are conditioned upon and also involve known and unknown risks and uncertainties that could cause actual results, performance, or events to differ materially from those anticipated by such statements, due to, among other factors:

Some of these risk factors are set forth and are discussed in more detail in “Item 3. Key Information — Risk Factors” included in our Annual Report on Form 20-F for the year ended December 31, 2015, as filed with the SEC on March 16, 2016. Should one or more of these risks or uncertainties materialize, or should underlying assumptions prove incorrect, actual results may vary materially from those described in this release as anticipated, believed, or expected. We do not intend, and do not assume any obligation, to update any industry information or forward-looking statements set forth in this release to reflect subsequent events or circumstances.

The management of STMicroelectronics will conduct a conference call to discuss the Company’s operating performance for the third quarter of 2016.

The conference call will be held at 9:30 a.m. CET / 8:30 a.m. BST / 3:30 a.m. U.S. Eastern Time (ET) / 12:30 a.m. U.S. Pacific Time (PT). The conference call will be available live via the Internet by accessing http://investors.st.com. Those accessing the webcast should go to the Web site at least 15 minutes prior to the call, in order to register, download and install any necessary audio software. The webcast replay will be available until November 11, 2016.

Oppo to start it’s own manufactuing unit in India