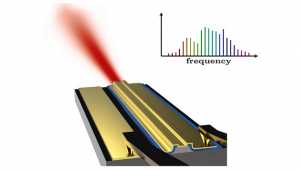 Researchers at the Vienna University of Technology (TU Wien) are working with laser frequency combs to enable chemical analysis on a chip. This new patent-pending technology will enable frequency combs to be created on a single chip in a simple, robust manner.

“It is relatively easy to build a spectrometer with two frequency combs,” researcher Benedikt Schwarz said. “It is possible to make use of beats between different frequencies, similar to those that occur in acoustics, if you listen to two different tones with similar frequency. We use this new method, because it does not require any moving parts and allows us to develop a miniature chemistry lab on a millimeter scale.”

The team produces its frequency combs using quantum cascade lasers (QCLs). These lasers are semiconductor structures that consist of many different layers. When electrical current is sent through the structure, the laser emits light in the IR range. The properties of the light can be controlled by tuning the geometry of the layer structure.

The researchers compared this phenomenon to swings rocking on a frame. If the frame is made to wobble at the right frequency, all the swings will oscillate in certain coupled patterns, instead of individually. Without the team’s technique, the lasers would be extremely sensitive to disturbances outside of a lab environment, such as temperature fluctuations or reflections that could send some of the light back into the laser.

Another advantage is that the QCL generates a frequency comb in the IR range, where many of the most important molecules can be most easily detected. “Various air pollutants, but also biomolecules, which play an important role in medical diagnostics, absorb very specific infrared light frequencies,” Hillbrand said. “So, when we measure which infrared frequencies are absorbed by a gas sample, we can tell exactly which substances it contains.”

The results could open the way to miniaturized and all-solid-state MIR spectrometers. For example, the chip could be placed on a drone to measure air pollutants. Chips glued to a wall could search for traces of explosive substances in buildings. The chips could also be used in medical equipment to detect diseases by analyzing chemicals in the respiratory air.