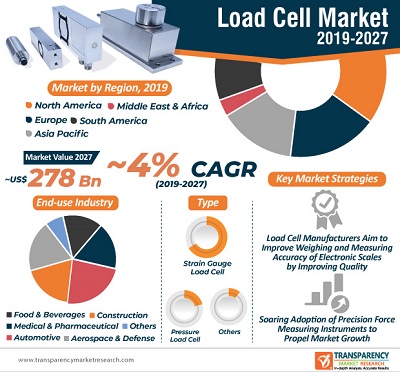 Furthermore, load cells provide accurate weight even under harsh environments, including extreme temperatures and humidity and extreme weather conditions. Owing to the ability to withstand harsh environments, the demand for load cells is on the rise. Several manufacturers are developing new products to cater to various applications. For instance, in 2019, Straightpoint, a load cell manufacturer, launched the Bluelink load cell, which is suitable for use in severe industrial environments.

Weighing accuracy is an important aspect considered while designing load cells, as several industries including healthcare and food & beverages rely greatly on high-quality weight measurement. Industries have been using traditional mechanical weighing systems or force measurement products over the years, owing to their low prices. However, due to the increasing demand for load cells from various industries, manufacturers have started producing new and advanced load cells.

These new load cells would help customers in measurement of weight and reading of data through mobile apps. Moreover, manufacturers are also designing and building vital load cell components for use in highly regulated industries such as pharmaceutical and food & beverages.

Europe is expected to dominate the global load cell market during the forecast period, owing to early penetration of technologies, presence of a large number of well-established players providing load cells, and increasing demand for load cells across industrial applications, including test & measurement equipment and automotive weighing systems. Countries such as the U.K., Germany, and France are major markets for load cells in Europe.

Moreover, the growth of the market in Europe is attributable to the imposition of increased landfill taxes (levied on materials disposed at landfill sites) in countries such as the U.S., owing to which load cells are being used in the country significantly for accurate measurement of weight of the waste to be disposed of into landfills. In addition to this, they are using truck scales to ensure precise weighing of trucks.

Furthermore, the market in Asia Pacific and North America is projected to expand at a significant pace during the forecast period, as a result of growing use of load cells in agriculture and food & beverages sectors. The U.S., China, Japan, and India are prominent countries in these regions.

A global load cell market witnesses a presence of a large number of well-established as well as emerging players. A few of the key players operating in the global load cell market are Tecsis GmbH, Honeywell International Inc., OMEGA Engineering, TE Connectivity, ALFA LAVAL, HBM, FUTEK Advanced Sensor Technology, Inc., ABB, and Flintec. These players are launching new products to gain higher market share. For instance, in June 2019, FUTEK Advanced Sensor Technology, Inc., a load cell manufacturer, launched a new load cell, which is sub-miniature in nature and is an addition to the company’s LCM load cell series. The capacity of this load cell ranges from 25 lbs. to 1,000 lbs.