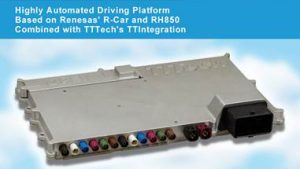 Renesas Electronics Corporation, a premier provider of advanced semiconductor solutions, and TTTech Computertechnik AG (“TTTech”), a global leader in robust networking and safety controls, January 5, 2017, announced that they have developed a highly automated driving platform (HADP). The new HADP is a prototype electronic control unit (ECU) for mass production vehicles with integrated software and tools, which demonstrates how to use Renesas and TTTech technologies combined in a true automotive environment for autonomous driving. The HADP accelerates the path to mass production for Tier 1s and OEMs.

The automotive market is moving rapidly to make autonomous driving a reality for consumers by 2020. The increasing information from sensors as well as its assessment and resulting actions require hardware and implementations of software that have high performance and comply with highest safety standards. Furthermore, the broad range of sensors and functions means new challenges for the implementation and integration of software.

The newly released HADP is the first outcome of the collaboration between TTTech and Renesas announced in January 2016, and is an extended version of the HAD solution kit released in October 2016. It is based on dual R-Car H3 system-on-chips (SoCs) and the RH850/P1H-C microcontroller (MCU).

The HADP has been developed based on an ASIL-D functional safety concept. It supports a highly efficient integration process for complex highly automated driving systems. The HADP can be used by Tier 1s and OEMs to immediately prototype their functions in an embedded automotive ECU. It shortens time to market by enabling system developers to verify and integrate software easily on the prototype ECU designed to deliver a faster track to mass production vehicles.

“With the automotive industry’s increasing focus on autonomous driving, OEMs are set to play a key role in ensuring the safety and robustness of innovative functions,” said Jean-Francois Chouteau, Vice President, Global ADAS Centre, Renesas Electronics Corporation. “The HADP offered by TTTech and Renesas enables OEMs to drastically reduce both development efforts and the time needed to bring autonomous driving on the road.”

“We are delighted to present the first joint platform of the cooperation between Renesas and TTTech,” said Dr. Stefan Poledna, Member of the Executive Board at TTTech. “Renesas’ expertise as a leading semiconductor solution supplier and TTTech’s proven experience as a provider of scalable safety ECU platforms are a perfect match enabling customers to develop highly performant autonomous driving solutions much quicker.”

Key features of the HADP:

The ECU has been developed for automotive sample grade quality following requirements on thermal design and shock resistance. It is provided in an aluminium housing targeting IP51 protection level for mounting in the passenger cabin or luggage compartment. The HADP can be directly connected to an automotive power supply and is designed to work at -40 to +85 °C operation temperature and exposed to vibrations in a running vehicle. The HADP comes with cabling and guidelines for easy adaption inside a vehicle.

TTIntegration is a software platform that provides all the services to run several safety critical applications in parallel on multiple SoCs. A sophisticated partitioning concept ensures that safety related applications cannot be impacted by other applications running at the same time.

Due to a co-simulation environment on a standard PC it is possible to develop functions on the embedded HADP platform side-by-side with applications running on a PC. They all can share the same data and services as if it would be a single domain ECU.

Seamless integration and testing of all applications are remarkably faster and more efficient in comparison to the usual step-by-step solutions.

The HADP and development support are scheduled to be available in Q2 2017 by TTTech.

(Availability is subject to change without notice.)

YouTube video about Renesas’ commitment to ADAS and Autonomous Drive 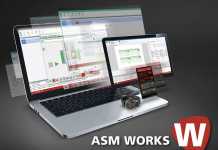 Nissan Planning to Manufacture and Launch Electric Cars in India