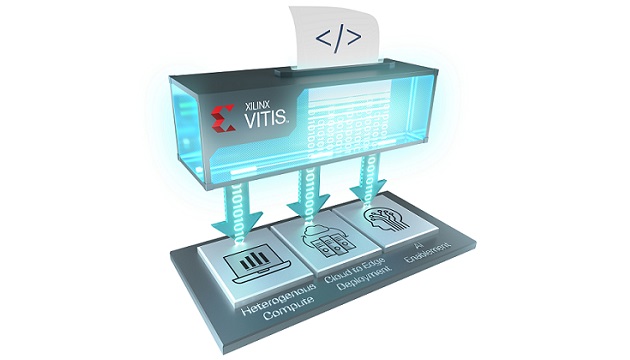 At this year’s Xilinx Developers Forum, the company introduced the Vitis software platform, which tailors the hardware architecture to the software of algorithm code without intervention. President and CEO, Victor Peng, explained that the unified platform was developed to “empower software developers, with the efficiency of application-specific hardware without (the cost of) new silicon.”

Hardware can be adapted for AI, data centre or heterogeneous computing applications, for example, without the need for hardware expertise, explained Peng. The platform includes familiar software development tools, such as compilers, and libraries that have been brought together under the Vitis umbrella.

A third layer has over 400 open source applications across the eight libraries, which can be used to call pre-accelerated functions using a standard application programming interface (API).

An AI plug-in, Vitis AI, integrates a domain-specific architecture (DSA). This configures Xilinx hardware to be optimized and programmed using industry-leading frameworks like TensorFlow for AI applications, Caffe and Data Analytics. The plug-in tools optimise, compress and compile trained AI models running on a Xilinx device in about 60 seconds and delivers specialised APIs for deployment from edge to cloud.

The company announced that it intends to release the Vitis Video DSA to enable video encoding directly from FFmpeg.