Photovoltaic-powered sensors for the “internet of things” 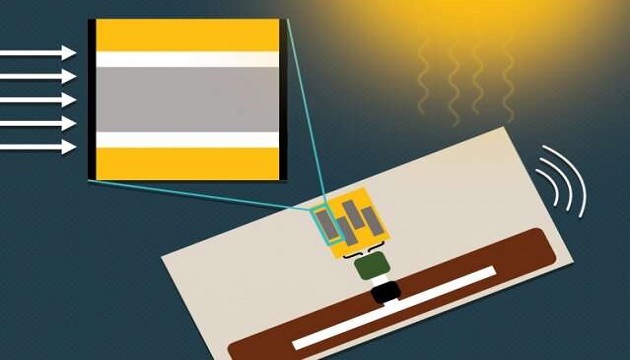 By 2025, experts estimate the number of “internet of things” devices — including sensors that gather real-time data about infrastructure and the environment — could rise to 75 billion worldwide. As it stands, however, those sensors require batteries that must be replaced frequently, which can be problematic for long-term monitoring.

MIT researchers have designed photovoltaic-powered sensors that could potentially transmit data for years before they need to be replaced. To do so, they mounted thin-film perovskite cells — known for their potential low cost, flexibility, and relative ease of fabrication — as energy-harvesters on inexpensive radio-frequency identification (RFID) tags.

The cells could power the sensors in both bright sunlight and dimmer indoor conditions. Moreover, the team found the solar power actually gives the sensors a major power boost that enables greater data-transmission distances and the ability to integrate multiple sensors onto a single RFID tag.

“In the future, there could be billions of sensors all around us. With that scale, you’ll need a lot of batteries that you’ll have to recharge constantly. But what if you could self-power them using the ambient light? You could deploy them and forget them for months or years at a time,” says Sai Nithin Kantareddy, a PhD student in the MIT Auto-ID Laboratory. “This work is basically building enhanced RFID tags using energy harvesters for a range of applications.”

In a pair of papers published in the journals Advanced Functional Materials and IEEE Sensors, MIT Auto-ID Laboratory and MIT Photovoltaics Research Laboratory researchers describe using the sensors to continuously monitor indoor and outdoor temperatures over several days. The sensors transmitted data continuously at distances five times greater than traditional RFID tags — with no batteries required. Longer data-transmission ranges mean, among other things, that one reader can be used to collect data from multiple sensors simultaneously.

Depending on certain factors in their environment, such as moisture and heat, the sensors can be left inside or outside for months or, potentially, years at a time before they degrade enough to require replacement. That can be valuable for any application requiring long-term sensing, indoors and outdoors, including tracking cargo in supply chains, monitoring soil, and monitoring the energy used by equipment in buildings and homes.

In recent attempts to create self-powered sensors, other researchers have used solar cells as energy sources for internet of things (IoT) devices. But those are basically shrunken-down versions of traditional solar cells — not perovskite. The traditional cells can be efficient, long-lasting, and powerful under certain conditions “but are really infeasible for ubiquitous IoT sensors,” Kantareddy says.

Traditional solar cells, for instance, are bulky and expensive to manufacture, plus they are inflexible and cannot be made transparent, which can be useful for temperature-monitoring sensors placed on windows and car windshields. They’re also really only designed to efficiently harvest energy from powerful sunlight, not low indoor light.

Perovskite cells, on the other hand, can be printed using easy roll-to-roll manufacturing techniques for a few cents each; made thin, flexible, and transparent; and tuned to harvest energy from any kind of indoor and outdoor lighting.

The idea, then, was combining a low-cost power source with low-cost RFID tags, which are battery-free stickers used to monitor billions of products worldwide. The stickers are equipped with tiny, ultra-high-frequency antennas that each cost around three to five cents to make.

RFID tags rely on a communication technique called “backscatter,” that transmits data by reflecting modulated wireless signals off the tag and back to a reader. A wireless device called a reader — basically similar to a Wi-Fi router — pings the tag, which powers up and backscatters a unique signal containing information about the product it’s stuck to.

Traditionally, the tags harvest a little of the radio-frequency energy sent by the reader to power up a little chip inside that stores data, and uses the remaining energy to modulate the returning signal. But that amounts to only a few microwatts of power, which limits their communication range to less than a meter.

The researchers’ sensor consists of an RFID tag built on a plastic substrate. Directly connected to an integrated circuit on the tag is an array of perovskite solar cells. As with traditional systems, a reader sweeps the room, and each tag responds. But instead of using energy from the reader, it draws harvested energy from the perovskite cell to power up its circuit and send data by backscattering RF signals.

The key innovations are in the customized cells. They’re fabricated in layers, with perovskite material sandwiched between an electrode, cathode, and special electron-transport layer materials. This achieved about 10 percent efficiency, which is fairly high for still-experimental perovskite cells. This layering structure also enabled the researchers to tune each cell for its optimal “bandgap,” which is an electron-moving property that dictates a cell’s performance in different lighting conditions. They then combined the cells into modules of four cells.

In the Advanced Functional Materials paper, the modules generated 4.3 volts of electricity under one sun illumination, which is a standard measurement for how much voltage solar cells produce under sunlight. That’s enough to power up a circuit — about 1.5 volts — and send data around 5 meters every few seconds. The modules had similar performances in indoor lighting. The IEEE Sensors paper primarily demonstrated wide‐bandgap perovskite cells for indoor applications that achieved between 18.5 percent and 21. 4 percent efficiencies under indoor fluorescent lighting, depending on how much voltage they generate. Essentially, about 45 minutes of any light source will power the sensors indoors and outdoors for about three hours.

The RFID circuit was prototyped to only monitor temperature. Next, the researchers aim to scale up and add more environmental-monitoring sensors to the mix, such as humidity, pressure, vibration, and pollution. Deployed at scale, the sensors could especially aid in long-term data-collection indoors to help build, say, algorithms that help make smart buildings more energy efficient.

“The perovskite materials we use have incredible potential as effective indoor-light harvesters. Our next step is to integrate these same technologies using printed electronics methods, potentially enabling extremely low-cost manufacturing of wireless sensors,” Mathews says.