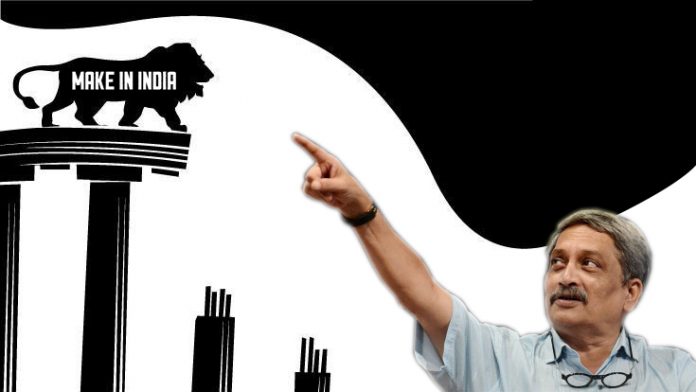 Manohar Parrikar’s effort in pushing “Make in India” policy in defence procurements has began yeilding results. This is after the Minister left his office in Ministry of Defence to take over again as the CM of Goa.

Purchase of 32 helicopters to boost the marine security capabilities of the Navy and Coast Guard and the Army identifying 25 Indian companies to supply  the ammunition that were hitherto imported are two latest results of the policy pursued vigorously.

A draft proposal left behind by Parrikar for buying ALH Dhruv helicopters worth Rs 8,000 crore from the government-run Hindustan Aeronautics Limited (HAL) has been now cleared by the Cabinet Committee on Security headed by Prime Minister Modi. Sixteen of these choppers will go to Navy and the remaining 16 to the Coast Guard. The HAL would not only provide the helicopters but it will also develop the infrastructure for operation of these helicopters in both the services.

It was during Parrikar’s tenure that the Army had issued a request for information in November last year for procurement of the ammunition and a request for proposal (RFP) has been now issued to the selected private Indian firms for supplies during the next one decade, with assured purchase of thousands of pieces worth crores of rupees. These incldue 125 MM armour piercing types used to stop tanks and armoured vehicles, 122 MM grad rockets for Pinaka series, 40 MM grenades capable of being machine-launched, 30 MM ammunition used by the armoured infantry carrying vehicles, electronic fuses and bi-modular charge system.