OLED with Radicals developed by scientists, to increase efficiency 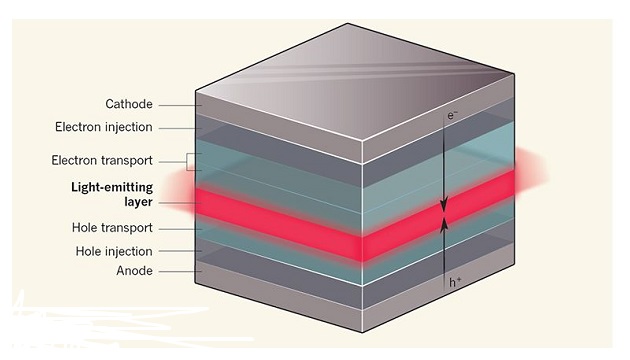 Scientists have developed several types of LED including OLEDs, quantum-dot-based LEDs (QLED), perovskite-based LEDs and Micro LEDs for the purpose of enhancing the brightness, contrast and resolution of displays as well as to reduce the production cost and energy use. A new research published on Nature has illustrated a development of OLEDs using free radicals which generate double emission with higher efficiency.

In the research, scientists from China and the UK have demonstrated radical-based OLEDs that could reach an external quantum efficiency of 27 percent at a wavelength of 710 nanometers, which is the highest record reported for deep-red and infrared LEDs.

To achieve the result, the research team used two organic free radicals in multilayered LEDs. Through the reaction of electrons and holes in different layers, this recombination generates light in the deep-red and infrared regions. In this light-emitting layer, photons are produced from electrons with almost 100% efficiency.

Reviews of the research from Tetsuro Kusamoto and Hiroshi Nishihara explained how using organic radicals breaks the efficiency limitation of OLED and introduced the history of using them in LEDs. They explained that organic radicals have only an odd number of electrons and are therefore highly reactive and chemically unstable. However, via modifying the molecular structures, some radicals would become stable enough under air. Researches have demonstrated light-emitting stable radicals and the possibility to use them in lighting materials and devices since 2006.

The review pointed out that currently, radical-based OLED emits light in a limited range of colors as only a small number of stable light-emitting radicals have been reported. Also, the electronic characteristics of light-emitting radicals make them difficult to emit blue (high-energy) light. According to the review, future research could focus on how to tune organic radicals to produce a wide range of colors. As radical-based OLEDs were developed just recently, there are potentials for further improvement.