Now your house will respond to saying, “Ok Google” 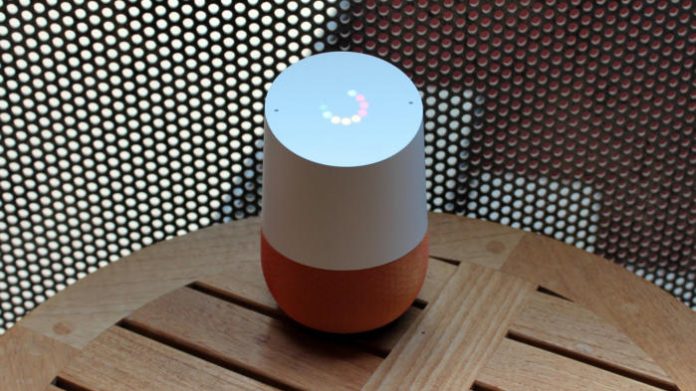 Previously announced in America back in October 2016 alongside the Pixel Phone, the new Google hardware will be available in the UK from 6 April.

The voice-controlled smart speaker Google Home – the company’s answer to the Amazon Echo device – features the Google Assistant speech recognition technology. It answers your questions and triggers third party controls, such as the Nest thermostat, tado heating controllers, Philips Hue LED lighting and both video and audio, via Chromecast.

“Ask Google Home a question, and it will give you the answer by tapping into the power of Google—Search, Maps, Translate and more,” says Google. “A combination of our natural language processing, machine learning and voice recognition expertise allow users to interact naturally with the Assistant on Google Home.”

There is also a tie-in with publishers to deliver news briefings. Sources such as the BBC, The Guardian, The Financial Times, The Sun, The Telegraph, Huffington Post, and Sky News are supported.

It responds to trigger words, such as “OK Google” and the only button on the device is a mute Mic control. You configure it via an associated app.

Google was addressing the Connected Home, said Kothari, with products designed to fit in, and not look like traditional consumer electronics items.

There are, for example, a range of coloured bases for the device to better suit home furnishing.

A lot of Google AI knowledge had also been fed into Google Home, he added.

“Google has simulated thousands of noisy environments,” he maintained, “in order to be able to support natural language understanding for a conversational experience.”

In terms of additional security for a device that will operate within your home, Google says it is employing “advanced security techniques” to protect code and content:

“All software is validated before it runs on the device via a cryptographically verified secure boot process, if the software is tampered with the cryptographic signature verification during boot-up will prevent it from being loaded and stop the operation of the device altogether.

Additionally, all traffic between Google Home and Google services is protected cryptographically. Finally, the software is managed by Google via regular updates that are pushed to the client.”

Described as a “home Wi-Fi solution”, Google Wi-Fi employs mesh Wi-Fi technology to better produce a reliable connection. Configuration options include prioritising particular apps, such as the streaming of video.

“Within our mesh network, each Google Wifi point creates a high-powered connection, and the different Wifi points work together to determine the best path for your data. The result is Wi-Fi coverage even in hard-to reach areas, not just right next to the router.

To make sure you’re always in control, Google Wifi comes with an app that lets you do things like pause Wi-Fi on kids’ devices (when it’s time to come to the dinner table) and is built to help keep your data safe and secure.”

More information can be found at madeby.google.com/wifi/