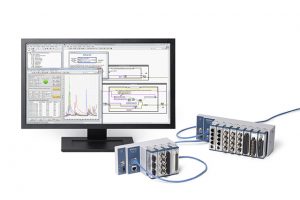 The nature of physical systems test is rapidly changing as measurement systems migrate from the control room to closer to the device under test. While this shortens installation time, reduces the cost of sensor wiring and improves measurement accuracy, it creates challenges with synchronization and systems management, especially using today’s industrial networking technologies. NI is actively working to help define TSN, the next evolution of the IEEE 802.1 Ethernet standard, to deliver distributed time synchronization, low latency and convergence of time critical and general networking traffic. The cDAQ-9185 and cDAQ-9189 provide tight time synchronization with TSN to simplify and improve scalability of synchronized, distributed systems. Features and benefits include: