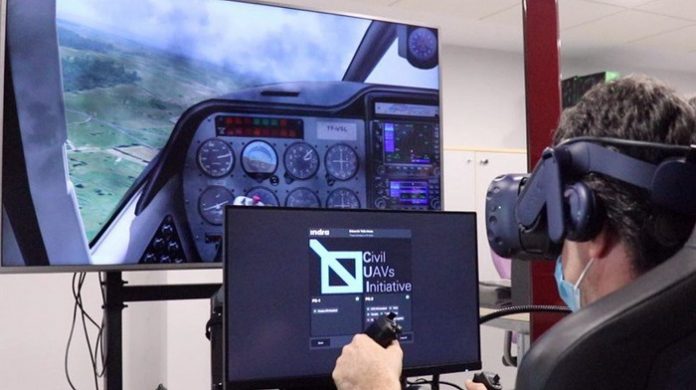 INDRA developed a new multipurpose and interoperable simulation system (SIMCUI), easy to transport and install in any space, with which the time required to train a pilot, civil or military , of any type of aircraft can be halved , whether fixed wing, rotary wing or remotely manned .

The same, they assure, has great quality and very adjusted cost, it is easy to maintain and exploit. This allows training centers to have one simulator for every two or three students .

In this way, the number of hours of ‘flight’ is multiplied and the theory is learned directly on the simulator . The system incorporates virtual reality glasses that not only increase realism, but also allow the student to connect from home to continue training. They also improve training in risky flights, in formation with other aircraft or tactics, in the military case.

The solution incorporates Artificial Intelligence algorithms to measure the performance of each pilot and analyze the strengths and areas for improvement.

In its development, flight models are used fully adapted to the needs and degree of realism that each client needs, whether it is a small flight academy, an airline or an entire air force .

At this time, the system has 18 simplified flight models that range from a Boeing 737 to the F-18 fighter plane , through light aircraft models from Beechcraft or Tecnam and civil and military helicopters from Sikorsky or Airbus Helicopters, among others.

In order to multiply the number of simulators that the client can purchase, Indra reduced the structure of the system to its minimum expression , maintaining the highest visual quality ─a state-of-the-art Invis4 system─. The reproduction of the aircraft’s flight instruments in different configurations uses touch panels.

The throttle controls and levers are quickly and easily exchanged depending on the type of aircraft on which the exercise is to be carried out. Optionally, a movement platform can be added .

Indra also prepared this system to train pilots of remotely piloted aircraft . Specifically, the SIMCUI already has the Targus flight model. This optionally manned aircraft developed by Indra in collaboration with the Xunta de Galicia within the Civil UAVs Initiative is the most advanced that has been manufactured to date in Spain.

Training in the area of ​​operations

The reduced weight of the SIMCUI structure facilitates its rapid transfer and installation to where it is needed. In the military field, this means that it can be transported to the area of ​​operations for pilots to prepare their missions before carrying them out .

Each of these simulators is designed to network, interact and share the same virtual scenario . Military pilots train in this way in the same way they operate.

With this new system, Indra covers a need that it had been detecting in the market . More and more airlines, armed forces and pilots demand continuous training, which complements the training they receive in the highest level and realistic simulation systems, in which they are examined to obtain their licenses and certifications.

Indra is one of the world’s leading providers of simulation and training systems, with hundreds of systems delivered on five continents . It develops systems for all types of land, naval and air platforms. In the aeronautical field, it is the company that developed simulators for a greater number of helicopter models. He also worked on the development of advanced simulators such as the Eurofighter, the A400M or the NH90 helicopter, among others.